In my previous article I tried to prove that the 7....Qe8 system in the Leningrad isn't solid enough to play regularly against strong players. I finished the article by mentioning some alternatives but I didn't go into details about what I prefer and how I would study it. In this article I will elaborate about the choices I made without giving away too much as many of my future opponents also read this article.

I very quickly decided to which system I would switch. Today most strong players prefer 7...c6 so I thought it was logical to do the same as that would most likely give the best chance to get a playable position with black. Besides I don't share any big secrets with this statement as since Open of Cappelle La Grande 2020 you can already find one of my games in the database with 7...c6 (more about it in a later article). However when I had made the decision last year, I discovered that there existed no recently published book or dvd from the Leningrad with 7...c6. How can I quickly study an opening when in the most recent megadatabase there are already more than 7000 games with 7...c6 only? How do you extract from such huge size of games what you need to know?

Well I try to ask an expert of course. I mean figuratively as I don't ask real questions but I look at his/ her games. So the first thing I did, was finding an expert. Chessbase can help you with it as today it is easy to discover which strong players have played a specific opening multiple times. However when I went through those mastergames I noticed most were blitz and rapid. Most +2700 players play the opening only in fast games. It sounds to me dubious to build a standard-repertoire based on somebody else rapid and blitz-games. In the end I was forced to create my own filters to investigate who is a real expert.

For me the ultimate expert is a +2700 exclusively choosing to play one opening. Unfortunately such player doesn't exist. I even didn't find a +2500 player willing to play at all costs the Leningrad with c6. Some players vary between openings and regularly include the Leningrad with c6 but nobody above +2700 elo. Till last year I considered David Anton Guijarro as the biggest expert but since he broke the 2700 barrier he only plays it anymore in quick games or as an exception. Nowadays I think the strong French grandmaster Maxime Lagarde deserves the honor of biggest expert in this system. Nonetheless I have to add it is not the only system he plays in the Leningrad and often I get the impression that he plays the opening without much study. The famous quote of Korchnoi is probably valid here too: I don't study, I create. Such approach is definitely not scientific.

I didn't learn much of those games. Fortunately I also possess an up to date correspondence-database. In that database I did find a number of strong players (+2400 ICCF) very regularly playing the Leningrad with c6. Some of them never even lost a game with it which is very good news knowing everybody uses engines very extensively in correspondence chess. So this also means that the system is likely not refuted yet. In below table I give a list of the experts of this opening in correspondence-chess with their title, current iccf-rating and score with this opening based on my database.

I limited the list to players having minimum 10 games played with the opening but any recently played game of a +2300 correspondence-player is definitely interesting to study as everybody uses the best engines and databases to select their moves.

Now we know the experts but we still need to define which lines we want to study. This can be expanded infinitely. However you should not forget that you still need to remember everything as otherwise it makes little sense to do all the efforts. I think it therefore is important to start with the most played lines. Once again I used for that my 100 master-games-rule which I introduced in my article studying openings part 2. However this time I worked from the front to the back instead of the back to the front. Below screenshot explains it better. 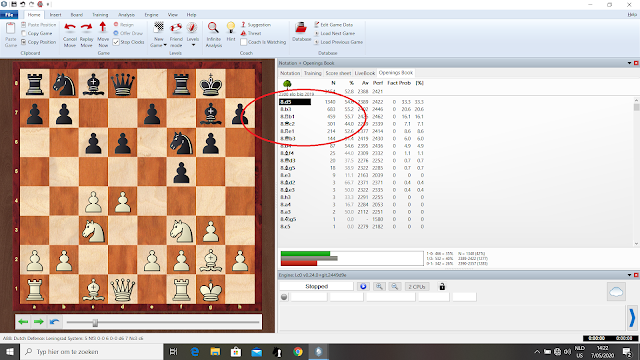 So for each of the moves having more than 100 master-games in the database which means in above position: 8.d5, 8.b3, 8.Rb1, 8.Qc2, 8.Re1 en 8.Qb3 I checked the games of the experts. Often there was unanimity but sometimes also divisive. I didn't want to make a random choice so when I had doubts, I created a separate speed-analysis focused on the 2 or 3 retained moves. To get a good idea of the pluses and minuses of each move I let Stockfish play dozens sometimes even hundreds of shortened blitzgames against itself (see computers achieve autonomy).

I repeated this process for the next move. Again I looked at my openingbook to know which moves are played in more than 100 master-games and again for each of them I decided via the experts or eventually some speed-analysis how I would answer each of them. After that I again repeated this process for the next move and the next move till there were no more moves of which 100 mastergames exist. This sounds very complex but in the end I only had 7 lines with a maximum depth of 4 moves. I still didn't know much yet about the new system.

Next I expanded my study systematically by looking at moves played in less than 100 master-games. First I treated all the moves played in at least 50 master-games. Later I decreased the number to even 30 master-games. The tree of variations grew from 7 to 12 with a maximum depth of 5 moves so still not a lot. However don't underestimate the work to create such tree. Meanwhile I already spent 1 month at it so I want to emphasize that it is always better to first buy a recent book/dvd about a new opening if this is available.

So when in August 2019 a new book about the Leningrad with c6 was announced by Thinkers Publishing, I didn't hesitate to buy it. The French grandmaster Adrien Demuth had written based on its own tournament-experience a very voluminous book of almost 500 pages about the Dutch with as central core the Leningrad with c6. Just like other books from this relative young publisher, the book got as label modernized so the title chosen was logically The Modernized Dutch Defense. 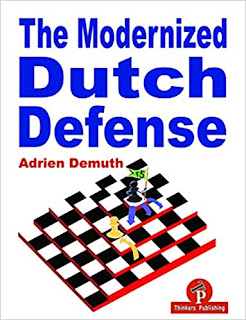 This title is surely deserved. The book is full of original analysis with a few exceptions. Coincidence or not but those few overlaps contain exactly the same wrong evaluations which I already discovered in the book of Malaniuk and which I mentioned earlier in my article the Leningrad part 1. If those mistakes could've been avoided then I would've been fully satisfied about my purchase.

So I finally have now a complete manual about the Leningrad with c6 but what should I do with my own made analysis? I noticed Adrien often chooses other lines. Well that was an easy decision. I still don't variate enough in my repertoire see e.g. my recent article surprises part 3 so why not keep them both in my repertoire. The first time I use my own analysis and the next time I follow the recommendation of the book. Besides this doesn't mean I have to know both by heart at the same moment. Twice the same line never happens in standard games on the same day.

Anyway most lines in the book I had never checked before so in those cases I didn't need to make a choice. On the other hand I also didn't want to study by heart almost 500 pages of analysis. A tip at chesspub told me to focus only at the bold printed moves and then create your own book via chessable but then I remembered that I have installed chess position trainer on my PC see part 1 and part 2. Contrary to chessable I don't need to be online for it. That is no luxury which I experienced during Cappelle La Grande. I had less than 1 hour to prepare in the tournament-room where no wifi was available. Of course you can circumvent this by setting up your own hotspot via your smartphone but then you lose again precious minutes without mentioning the extra costs. Players wishing to work with chessable during a flight are completely helpless.

I still feared it would be a lot of work to convert the bold printed moves into pgn but in the end it went rather smoothly as I ignored some chapters (I play something else or I considered the lines very rare). In a bit more than 2 hours I was done with it. My original analysis based on 25 moves expanded with 133 new moves. On Chess Position Trainer it takes me a bit more than a half hour to execute all the moves once correctly so this seems to be for me a limit for the time being. I think it is a nice balance between quantity and quality. I am pretty sure about that as even the not so well-known line recommended by Sim Maerevoet in the article ideas part 2 wasn't forgotten (as this was covered in the bold printed moves of the book).

In short when I started using Chess Position Trainer in 2017, I was skeptic about the possibilities of the software. Meanwhile I've adapted my view about it although I imagine that I use the software differently to what the developer had in mind. Finally I also want to add that recently I was able without a hitch to transfer my complete repertoire to a new PC with Chess Position Trainer. The license-key allows you to use it 3 times and even after several years this was still valid.