As we won't be able to play chess for many months, it is important to do something useful with the freed time. So one of the very first things I did when the lockdown started, was selecting an interesting book to read. I didn't need much time for it as I already follow for several years the blog of the Australian grandmaster David Smerdon so I knew in advance that his new book The Complete Chess Swindler could never be a wrong choice. 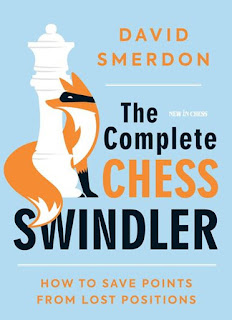 Originally the author had the intention to give an anthology of the most beautiful and fantastic swindles in the history of chess. However while writing his book David discovered that it was possible to create a manual to teach people finding swindles in their games. I think the book is an admirable effort but I don't expect that having read the book, has made of myself a much better swindler. Anyway for me this book is in the first place a very nice collection of swindles and some good stories which makes the book very enjoyable to read.

Besides this doesn't mean that no other players can learn something from this book. I fully agree with the author that endgame-technique/knowledge is on the top of the list of skills a swindler must have. On my blog I gave a dozen examples in several articles about endgames in which I was able to steal half or even full points. Playable endgames are achieved in only a small number of games but in those few games I see many players could make a lot of improvement in that domain.

The last in the list of skills is sportsmanship or rather the lack of it. It is clear to me that the author was having doubts about to include it or not to the book. He also mentions in the book that he only inserted the swindles which are still legally allowed. Maybe 1 of the most funny ones is the toilet-swindle. You notice that your opponent is wiggling on his chair and most likely needs to go to the toilet. However your opponent has also very little time left on his clock while on the other hand you still have loads of it. Therefore to maximize his discomfort you start to play very slowly or even not all anymore for a longtime. This leaves your opponent with a very difficult choice between wet pants, losing on time or keep on suffering and trying to survive till the end of the game. Well you wan't believe me but such choice I had to make in the last Open Cappelle La Grande in round 5 against the Bulgarian grandmaster Radoslav Dimitrov. I don't know why I deserved such treatment but in a position which is a dead-draw my opponent let his clock run down on purpose for 38 minutes (readers wanting to check this, can still read today the clock at whites 67th and 68th move on chessbomb).
[Event "Open Cappelle La Grande 6de ronde"] [Site "?"] [Date "2020"] [Round "?"] [White "Dimitrov, R"] [Black "Brabo"] [Result "1/2-1/2"] [SetUp "1"] [FEN "8/k7/8/K7/P7/3N4/4p3/8 b - - 0 67"] [ECO "A01"] [WhiteElo "2510"] [BlackElo "2251"] [PlyCount "36"] 67... Kb7 {(Only now white realized that a win became impossible. By taking the black a-pawn, black can now get much quicker to the white a-pawn. Instead of accepting the draw, white let his clock run down for 38 minutes likely with the intention to use the toilet-swindle.)} 68. Kb5 Ka7 69. Kc4 Ka6 70. Kb4 Kb6 71. Ne1 Ka6 72. Nc2 Kb6 73. Kc3 Ka5 74. Kb3 Ka6 75. Nb4+ Ka5 76. Nd3 Ka6 77. Kb4 Kb6 78. a5+ Ka6 79. Ka4 Ka7 80. Kb5 Kb7 81. a6+ Ka7 82. Ka5 Ka8 83. Kb6 Kb8 84. a7+ Ka8 85. Ne1 {(With a knight on d4 white could allow the promotion as then he would be on time for delivering mate at c7. Stalemate is a nice conclusion of this game. )} 1/2-1/2
Everybody in the playing-hall saw it was a draw, even my daughter Evelien rated 1400 elo had seen it and almost felt asleep at a board a bit further. Anyhow I didn't want to give him a half point so I squeezed my balls and tried to manage the pressure. Finally Radoslav ended the game with stalemate having a big grin on his face. I had suffered enough. Some grandmasters are really weird people. Besides that evening we still had to play a second game so I didn't understand what there is to gain by wasting a full hour this way.

However except skills which we should or shouldn't have, psychology probably plays even a bigger part in swindles. The domain of the swindles starts when normal moves won't help you anymore to save a game. The author categorized the swindles into 4 types depending on which weakness was exploited: rush, hubris, fear and control. Most of the examples shown are prepared by the author as exercises as they consist of one concrete idea. Beside also a remarkable collection of biggest swindles are annotated in the book of which one side has a clearly lost position for many moves but in the end can still surprisingly reverse the result. To emphasize the size of the miracles, the author added to each of those games an evaluation-profile of the game generated by the engine.

In the game I more or less execute what David advises in his book. When you are lost then it is important to complicate the game at all costs and often king-safety can hereby play a crucial role. I noticed white's king was standing alone so I made sure some open lines were created at all costs. Suddenly I was able to create some threats and white panicked. The exchange-sacrifice wasn't necessary. It is still winning after it but it gets much harder to find the right moves. In the end white even collapsed as he was running out of time. White thought by pushing his pawn that he could divert my pieces but missed a surprising mate. In the game I already sensed this would happen after I took his pawn on f3.

Less outspoken but with much more at stake happened in the most recent round of the Belgian interclubs so just before the federation decided to stop the championship and later even to nullify all the results. Again we are at move 40 and I have a completely lost position. Many players already resigned better positions see e.g. resigning. Also my opponent the Belgian FM Hendrik Ponnet was confident about the outcome and had a stroll after the hectic moves just before the time-control. However I guess he relaxed too much at that moment as he allowed completely unnecessary counter-play in the next moves. Hubris is maybe not the right term here but for sure he lost focus.
[Event "Interclub Deurne - KGSRL"] [Site "?"] [Date "2020"] [Round "?"] [White "Brabo"] [Black "Ponnet, H"] [Result "1/2-1/2"] [SetUp "1"] [FEN "3r1r2/1b5p/p7/2b1pkp1/2B2p2/1PP5/1B4PP/3RRK2 w - - 0 41"] [ECO "B06"] [WhiteElo "2296"] [BlackElo "2288"] [PlyCount "46"] {(Black not only has an extra pawn but also his pair of bishops is working fantastically. On top white's king is stranded in the center where the hostilities will start any moment. The decision is just a matter of a few more moves. Kibitzers were sure the game was finished including my opponent Hendrik as I have no counterplay at all.)} 41. b4 {(However even the most ugly positions possess often something good which is here a pawn-majority on the queen-side. So logically I try to use this last asset but normally this shouldn't cause any real problems for black.)} 41... Bb6 42. b5 axb5 43. Bxb5 e4 44. Ba3 Rf7 45. c4 f3?? {(Black built up with some strong play a clearly winning position but in his last moves Hendrik relaxed a bit too much and now white has created counterplay. Black is still winning but the path has become narrower. F3 is the wrong pawn-push.)} 46. c5 e3 47. gxf3 Rxd1 48. Rxd1 Bxf3 49. Be2 Bxe2+ 50. Kxe2 Bc7 51. Kxe3 Bxh2 52. Kf3?? {(I missed a few times an instant draw but now I have to make a difficult decision. Is the c-pawn strong or should I try to defend with my king on the weak wing as the standard rule says? I make the wrong choice so c6 was mandatory.)} 52... g4+ 53. Kg2 Be5 54. Bb4 Ke6?! {(Both players were again playing on increment but this time we both knew that this game would decide the match. Not surprisingly mistakes were unavoidable. Here Rb7 wins for black.)} 55. Be1 Ra7 56. Rd2 Ra3 57. Bf2?! {(I immediately regretted this move as of course I had to use the c-pawn to create counter-play which can only with Rc2.)} 57... Rc3 58. Re2 Kf5 59. Ra2 h5 60. Re2 Bf4 61. Ra2 g3 62. Be1 {(I realized that Bg1 would be very easy to answer. Suddenly I noticed Be1 so I thought why not try it as a last trap.)} 62... Rxc5?? {(Black's rook is attacked but also the c-pawn isn't defended anymore. That pawn annoyed black for many moves already and then you miss that by taking the pawn you don't protect the g-pawn anymore sufficiently.)} 63. Bxg3 {(Almost everybody looked at each other as what happened here. I escaped miraculously.)} 63... Bxg3 {(This draw gave us a very valuable match-point in our relegation-battle which later was nullified due to the corona-crisis.)} 1/2-1/2

Hendrik had to win the game twice. At the end of the game the tension rose as it became clear our game would not only decide the match but probably even play a crucial role in the very nerve-wracking relegation-battle which was ongoing this year in second division. If I would make a draw then we would win the match and have good odds to assure our spot in 2nd division in the last 2 matches of the season. However I once more got into problems in the game and the crowd around our board started to grow as the climax was getting nearby. With literally a few moves away from the defeat, I decided to gamble. My opponent had very little time left on his clock so I tried a last trick by giving up my last pawn and it worked. The c-pawn annoyed Hendrik for so many moves that he took it when he thought I just was chasing his rook. However by doing that he dropped his important g-pawn after which a dead-draw rook-endgame occurred. It was an incredible swindle which allows us today to look forward with some satisfaction to battle next year again in second division.

Such swindles demand creativity (26... Nh8!!??) but also perseverance of defending inferior endgames. I personally think this is much more interesting than just 1 idea. One last tip of the book I think is still useful to share. When you want to create a swindle then first try to figure out if there is a move which your opponent really likes to play. Then look to what your position still can offer. Try to find a move which uses this last trump card and at the same time doesn't seem at first sight to prevent the move your opponent wants to play. The book but also our own practice proofs such approach often let you swindle successfully.