Maybe some readers already noticed it but I updated last week all the 244 old articles of this blog to the Chessbase-viewer. I took me slightly more than 10 hours editing html-code so not something you want to do often. Of course the idea is that for the new articles I will be using the same viewer.
I was already for some time toying with the idea of switching the viewer but only recently made work of it. Due to the corona-crisis all my regular chess-activities are on hold so I have now plenty of spare time. Besides I was also warned that by end of this year flash wouldn't be supported anymore. Some browsers like chrome were already trying to discourage the usage of flash for some time which was the reason why I mid 2017 made the switch to the Chess.com-viewer. More and more readers were complaining that they had troubles with the flash-viewer and I guess because of that many of them already lost interest in this blog.
At least that is also how I look to blogs. If the information is not highly informative then I am not willing to spend much time at it to figure out how to make e.g. flash work. Besides there exist probably hundred(s) of (chess-)blogs and honestly 99% or even more is not worth reading at all. So a blog should be interesting as well as easily to read/ consume.
Now one could wonder what is the point of refreshing all those old articles. If I look around then I see almost no (chess-)blogger does. Also most content is extremely quickly outdated. Tournaments are (at least before corona) following each other at a crazy speed. What is the point to look at reports of events which happened x months/ years ago? It is nice just after the event to read such report but then it loses very quickly its value. Well if you look at my old articles then you will see news has never been my main subject. I can never compete with the professional news-sites so I decided from the very beginning that the content of this blog should be very different if I want to stay relevant for the reader.
Content on this blog has to be as unique as possible (plagiarism is a big plaque for most blogs but I am sure that this is not the case here), have a personal flavor (e.g. own experiences) and give the reader something to digest (ideas/ tools/ ... which could influence their own approach to chess). It is also why some topics of my Dutch blog weren't translated to English as I thought they would have little value for an international community. So in general I believe the content here on this blog is much less vulnerable to the erosion of time and therefore it makes also much more sense to keep it alive.
I also see this in the blog-statistics. Every day old articles are addressed so the content on this blog does keep a value even x months/ years after its publication. Besides I won't deny that I regularly use myself this blog as an archive to look up things as I also don't manage to remember myself everything what I once wrote. So for me keeping this blog as long as possible in a good condition, was an easy decision to make. To decide upon which viewer I should use, was a bit more tricky.
At I stated earlier mid 2017 I switched to the Chess.com-viewer. At that time it was the best available option see new viewers part 1. The viewer of Chessbase was considered slightly better but contrary to the Chess.com-viewer not for free so very rarely used by any blogger. I guess this probably convinced Chessbase in 2018 to stop asking money for it. What is the sense of keeping a nice tool behind a paying wall if almost nobody is using it?
Besides more bloggers got recently pushed to the Chessbase-viewer as Chess.com doesn't care much about the impact of software updates at their viewer upon older articles. Have a look to how ugly some old articles are now looking due to those unwanted software updates: an article of 2016 on the blog of the Australian grandmaster David Smerdon. When you just finished updating the html-code to restore the old look of the Chess.com-viewer, again a software update was launched creating an ugly second scrollbar at the right see : an article of 2019 on the blog of the Macedonian grandmaster Alex Colovic.
Correct there is no guarantee that this won't happen with the Chessbase-viewer. Still I think this is enough reason to try out the Chessbase-viewer instead of the Chess.com-viewer. Also I like it that contrary to the Chess.com-viewer all the games remain stored on this blog and not their website. Functionally-wise I don't see important differences between both. Downloading, analyzing, changing layout it is in both viewers possible. In the Chess.com-viewer you had initially the possibility to analyze on the blog itself but after one more software update you are now directed to their own site/ server. I think staying on the blog itself is a bit more easy, especially with "the maximize board" option (see below red circle). 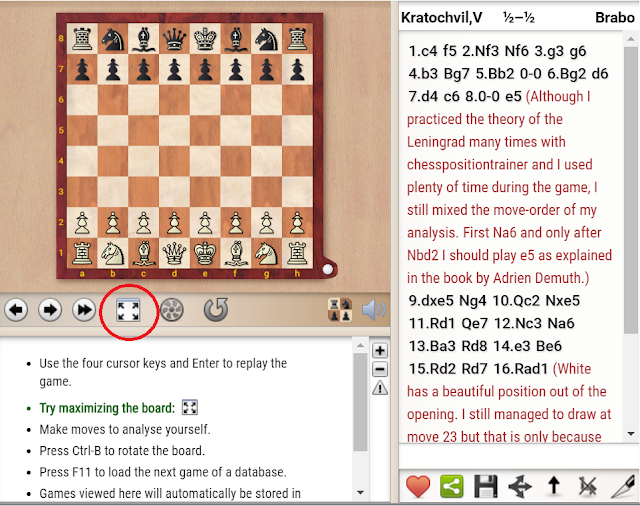 Returning back to the blog is simply pushing again the same button (so don't push the x in the right-up corner or you close the complete browser by accident as I did a few times).
Unfortunately I have to admit that the Chessbase-viewer also have some smaller defects. While doing the migration from the Chess.com to the Chessbase-viewer I noticed some of the ascii-codes linked to the annotations got corrupted. To keep things easy I just removed them as I assume the reader can always push the wheel below the diagram to get an instant evaluation of a strong engine.
Another issue is that by opening several blogarticles on the same screen, the content of the viewers gets destroyed. I guess it has something to do with not closing in html after each article correctly the viewer which creates conflicts but I can't find out how this should be solved exactly. You can see this behavior clearly when you e.g. want to see the articles of September on this blog. It is the reason why I only allow 1 article anymore at once to be shown as default setting. I don't think it is a very important issue as my articles are anyway quite long so better to read one by one.
Last I also have the impression that the Chessbase-viewer is less stable on mobiles. I almost never use my mobile for it but I guess some people like to read an article while travelling on the train to school/ work. So all this made me hesitate to do the same migration for my Dutch blog. It will probably also take twice as much time to do. To keep 2 separate viewers has also the benefit of getting less impacted by sudden outages. I think big companies like Chess.com and Chessbase won't disappear quickly but chess keeps changing so you are never sure what happens over time. Anyway I invite you to take a look back in time on my blog. Comments on the old articles or new viewer are always welcome.
Brabo
Posted by Brabo at 16:38 No comments: