Recently I saw a tweet at twitter stating that “Kens password was hacked”. Apparently somebody had found in 2014 a unix passwordfile, from a very selected group of ITers (you can call them pioneers) and at that time already tried to hack the passwords (unix encrypts the passwords in such way that even admins or a superusers can't decipher them). There were some famous names like Ken Thompson, Dennis Ritchie , Brian Kernighan, Steve Bourne and Bill Joy. We talked about a team which defined in the years ’60 and ’70 the base of all our current ICT. If you would convert those names to topplayers that we would be talking about Steinitz, Tarrasch, Lasker, Reti and Nimzowitsch, no less.

That unix-file with passwords seemed very difficult to crack in 2014. The hardware wasn't as strong as nowadays. 20 words were revealed quite quickly but five resisted. The last man standing was… Ken Thompson, and his password was chess-oriented.

On this site (ken thompsons old unix password cracked) you can read the story. Encrypted unix makes his password “ZghOT0eRm4U9s” and it appeared eventually to be “p/q2-q4!”. In other words, his password was just “d2-d4!”.

Chess-oriented passwords are strong, and that is no surprise: Kens password contains letters, special characters in an apparently illogical sequence. Now that is a trick which I also use. The reason is simple because if you use as password “1.d4 f5 2.e4!”, then you only need to remember “Staunton”. I also remember that as a student in Oostende I logged on the PDP-11 with my name and “e4e5f4” as password.

There are several sites which allow you to test the strength of your password: 2 good sites are https://howsecureismypassword.net/ and https://password.kaspersky.com/. Other sites give you guidelines about which characters you can add, but these two give an indication how long it lasts to crack your password. This indication largely depends on the speed of the computer and as the first site is more conservative (they think that hackers are very well equipped), I prefer to use the first one.

Of course the more moves, the better; the French MacCutcheon (1.e4 e6 2.d4 d5 3.Nc3 Nf6 4.Bg5 Lb4) lasts 10^48 years, without using exclamation-marks or question-marks. For people playing this line, it is simple but it is rather long so impractical to use. A rather short one is “Saveedra 6.c7-c8:T!” which  demands already 36 x 10^18 years of calculations, much easier to remember.

If you don't want to remember move-sequences, but rather prefer a chess-name as password, then I can recommend “Roman Dzindzichashvili” (42 x 10^21 years) or “Zurab Azmaiparashvili” (596 x 10^18 years). Have fun en keep it safe!

Having a son or daughter playing chess, requires a lot of patience from the parent(s). Especially when you accompany them to tournaments then you better realize in advance there won't be much time left to do other tasks. Besides as a parent you are mostly ignored by the chess-organisation. Often you are lucky to have a chair on which you can sit as I experienced several times at youth-tournaments that no separate space was provided for the companions.

Also you better try to do something enjoyable while waiting many hours as just sitting (like in the first picture of my article the memory) can be relaxing but surely won't be pleasant. Most parents are therefore armed against the hours of waiting. Some bring their computer to watch a movie. Others are writing a report for the job. I also see some parents gathering together to play cards or other games. I mostly belong to the group of readers so I bring a book, newspaper or some other literature with me.

Although in most cases I don't manage to read much in the end. I like too much talking to other people which probably also explains for a large part the existence of this blog. I don't have much trouble to start making a conversion with an unknown person and that has its advantages. This way you sometimes meet some really interesting personalities.

One example is the mother of Ines Dellaert. I had an enjoyable chat with her during Open Maastricht of 2018 and learned that she was trying to become one of the very first professional drone-pilots in Belgium. In Open Maastricht 2019 I met the papa of Matthijs De Groof. He started a couple of years ago together with his brother a company for gas-pressure-regulators see gasflowsolutions. He travels around the world to explain and sell his products. In the latest onjk an ex-professional-footballer joined my table. We had quite some fun because he was telling many anecdotes from the time he was still playing in the Dutch first division. Finally I want to conclude with the very congenial Alfred Olree with whom I was waiting every day at the same table for our children.

Alfred has an incredible rich life. Beside a very busy job as HR-officer, he is also father of 3 sons, married with (indeed) a Russian lady, youth-leader + director-member of the chessclub de drie torens and finally also has a beautiful passion for cats. Briefly there was enough to talk about for hours and even my wife paused her shopping for awhile to listen to all the stories. If it is about Russia and especially cats then she is interested. Besides it aren't just cats which Alfred has but the extraordinary magnificent Maine Coons. He already won many prizes with them also in Belgium.
Cats and chess, it sounds a weird combination but it happens more often than you probably think. There is even an opening named after the largest cat in the world. I mean the lion of course.

This opening has a very special history. Contrary to most other openings the lion wasn't invented by a grandmaster but by an amateur with the appropriate name Leo. According to archives Leo created the opening about 50 years ago and meanwhile many players have followed his footsteps. Particularly at amateur-level the system remains very popular till even today.

The system has some great assets compared to other openings. First it is an universal system so it can be applied against a wide range of setups. It also delivers excellent counterchances for black which allows to play for a win even against higher rated players. Finally it is very easy to learn which is of course handy for an amateur often not having much time to study chess at all.

Nonetheless the fact that the lion never became a mature opening at master-level in the last 50 years, should warn you that something isn't fully correct. That was last demonstrated in a game of my son which he played in the last onjk. If you have a name as Robin Van Leeuwen then you are almost automatically a fan of the lion but that doesn't mean necessarily you will score more points.

At the master-level this sacrifice is well-known. Also I had met by coincidence the same opening in the most recent edition of Open Gent so I had just before onjk made some deep analysis of it.

Cats and chess doesn't sound like a good match to me. Still at home my cat often gets attracted by my chess-activities but does lose very quickly its interest. It is much more fun to have a nap on my warm belly instead of watching some boring pieces moving around. 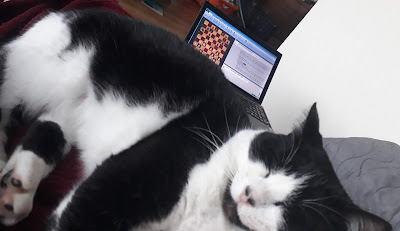 Just try from this position to reach the computer without waking up the cat. I have to make the most funny movements to push a button and it is practically impossible to get the right position on the board.

Finally this isn't the most funny part of the story. Did you know that I am allergic for cats? Still for our cat I am his most favorite person in the house. I guess it is because I am the one daring the least to touch him. So why do I even have a cat at home? Well that is something you have to ask to the other inhabitants of our house.