Sacrificing pieces is something very common in our games. Gambits remain very popular at amateur-chess but even in top-games we see little respect for material. A couple of days ago Kramnik played a brilliant game filled with sacrifices against the strong German grandmaster Matthias Bluebaum see e.g. here. Or what to think about the Chinese grandmaster Wei Yi beating a week earlier the Russian top-grandmaster Vladimir Malakhov with an ingenious exchange-sacrifice see e.g. the newsreport at chess.com.

Technically and psychologically the task of the defense is difficult so it often pays to sacrifice material even if it is not fully correct. A theme which is closely related to this is grabbing material. I don't speak just about answering gambits offered by the opponent but rather when you discover that pressure/ initiative can be converted into a material-gain. Will you choose to get the dividends by grabbing the material? Or will you wait and hope for more by playing double or nothing?

An initiative is often temporarily. If you don't succeed to transform it into something tangible like material or structure then you risk staying empty handed. However a bird in the hand is worth two in the bush isn't always so unambiguous in chess. I experienced this a couple of months ago. The game against Frederic Verduyn was already covered in the article chesspub but this time I only look at the phase where I decided to pick up a pawn.

In hindsight it was probably more clever to not go for the pawn and just maintain the positional-advantage. However there are no guarantees here because if you don't understand how the advantage should be nurtured then it can quickly go downhill.

Another example of this theme popped up in my most recent interclub-game against David Roos. Also that game was already published here see scholar's-mate. I zoom at move 18 when I decided to grab an exchange.

In my most recent rated game I managed to overcome my materialistic demons. I ignored one material gain after the other (including even a piece) and scored my most convincing win ever against Robert Schuermans. I am pretty happy about that as I had to win with black to become club-champion of Deurne.

At the end of the game I was up so much material that I could afford to sacrifice an exchange to force resignation. Beside Robert had no time left anymore while I still had a half hour. In the game we see all the advantages of waiting to grab material and adding systematically pressure.

The opponent loses a lot of time to find solutions for the ever growing problems. Often we see that there is much more material to collect. Practically this strategy is very efficient but in practice it is not so frequently used in comparison to gambits. Psychologically there exists today wrongly a large difference of perception between sacrificing material and not grabbing material for the same less visible advantages.

Each of my students has its own repertoire. In my lessons I don't try to persuade them to learn other openings. I only made 1 exception when we discussed the theme "material and time". Using a very interesting and unknown idea in the mainline of the Evans-gambit I tried to stimulate my students to get less attached to material and focus more at keeping the initiative.

So normally I don't teach about openings. There are enough good opening-books in which you can study something quickly which is sufficient for playing a nice game as clubplayer. Besides specializing into an opening is very time-consuming and it makes no sense without using the best engines (see studying openings part 2).

Nevertheless it is good not to restrict yourself solely to looking at games within your own repertoire. Not seldom an idea of another opening can be used in your own openings. Many openings have similar pawn-structures so same ideas can pop up. The American grandmaster Grigory Serper wrote recently 2 inspiring articles how to study master chess games and more lessons from master games. Another big step forwards is Chess structures A grandmaster guide written by the Chilean grandmaster Mauricio Flores Rios and published in 2015. 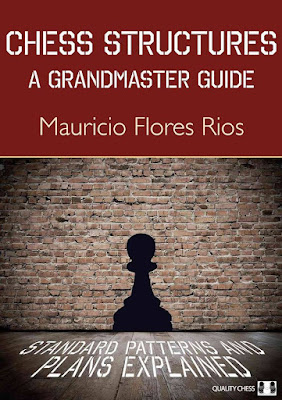 In 22 chapters the author described the most important pawn-structures and the standard-plans connected to them. Maurio tells us in the introduction that he missed this book when growing up as player to grandmaster. So he found it about time to change this. It is no bragging as I read at chessexpress.blogspot that also other players were for many years searching for such type of book.

It is often necessary to learn long strings of moves to survive an opening. However not less important are knowing the big schemes of the most common pawn-structures. Many players have no clue what they need to play after the opening. " Chess Structures" won't offer always an answer of course but it is today the best medicine to improve the chances by spending little time.