A month ago I wrote an article about which games to analyze and because it received some positive reactions, I decided to write a second one. Some people asked me what exactly I meant with openingideas which I casually mentioned in my previous article.

So in this article I will explain my working-method and share a few secret opening-ideas (well obviously not so secret anymore as otherwise I wouldn't discuss them here). I did doubt a bit about writing this article as Brabo told me that his own articles are used to prepare against him. Therefore I only share ideas of openings which I don't play or stopped playing a while ago. In this article I make a split between opening-ideas for myself and opening-ideas which I use as starting coach. 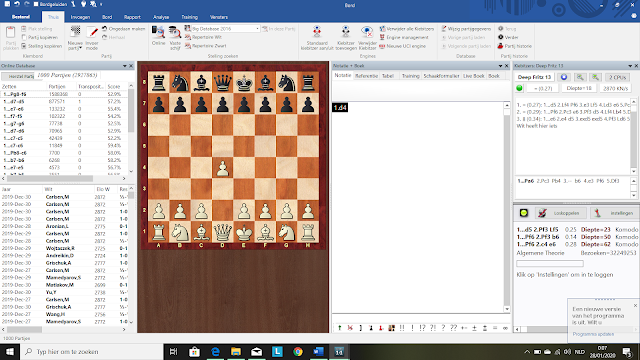 Unfortunately I don't have enough flexibility in my repertoire to give you ideas for black. Still I can recommend you to look for such ideas in the games of FM Arno Sterck. He is one of the most underrated players in Belgium but he is one of the main reasons of the success Bruges is experiencing in the interclubs. One of his most recent victims was against the team of eurochess. So his opening-ideas are definitely worth a look!

I don't have yet permanent students but I do sometimes give some classes to young players often rated between 1500-1900. At tournaments I also often help 3 players to prepare for their games (I am still looking for some children in the Belgium youth-championship so if you are interested please contact me). I also have rearranged my opening-ideas recently for them. Today I find it more important to use ideas in which you know what to do. This is something which is important for any level of play. I have learned this from the very experienced and excellent coach, FM Roel Hamblok. This is however contradictory to what my own coach Bruno Luyckx (the most motivated chess-coach I have ever met and it would definitely be interesting to write once an article about just him) has taught me. Despite I practically accept anything of Bruno, I do prefer to understand positions above creating chaos. So I will try always to look at openings or ideas with a limited number of pawnstructures. Pawnstructures are in fact the base of any opening and more broadly of chess itself. Below you can find an idea (which I found by using chessbase independently) against the caro-kan for white. It is nothing special but it is very easy to play for white. Ideal for a young student!
[Event "?"] [Site "?"] [Date "2020.01.23"] [Round "?"] [White ""] [Black "?"] [Result "*"] [ECO "B13"] [Annotator "Sim"] [PlyCount "22"] [SourceDate "2020.01.23"] [SourceVersionDate "2020.01.23"] 1. e4 c6 2. d4 d5 3. exd5 cxd5 4. Bd3 Nc6 5. c3 Qc7 {Qc7 is the most accurate move and many books recommend it. The idea is to avoid Bf4.} (5... Nf6 6. Bf4 Bg4 (6... e6) (6... Qb6 7. Qb3 Qxb3 8. axb3 {white wins}) 7. Qb3 Qd7 8. Nd2 {h3 is slightly inaccurate as Ne5 attacks the bishop}) 6. Ne2 Bg4 7. O-O e6 8. Qe1 Bd6 (8... Bxe2 9. Qxe2 {white has the valuable pair of bishops}) 9. f3 Bh5 (9... Bxh2+ 10. Kh1 Bf5 11. Bxf5 exf5 12. Ng3+ Kf8 13. Kxh2) (9... Bf5 10. Bxf5 exf5 11. Bf4 {this isn't fun to play for black at all}) 10. Qh4 Bg6 11. Bxg6 fxg6 {white has a large structural advantage} *
To conclude I want to add that openings aren't the only thing we should study but it is the domain which allows you to master rather easily with the current strength of engines and database. It allows you to ask annoying questions to the opponent from the start. An idea doesn't need to be a refutation. The most important is to take your opponent out of his comfortzone by letting him play non-standard pawnstructures of which you are pretty sure that it wasn't studied yet in detail.

Sim Maerevoet
Posted by Brabo at 18:37