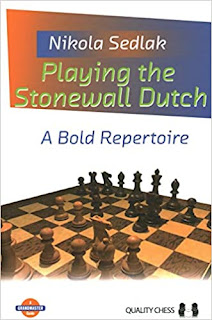 Only 1 page in the book I was able to find about this opening which is a disappointment. This is a huge difference compared to the 38 pages !! in the book The Modernized Dutch Defense which I already announced in my article chess position trainer part 3. I believe 38 pages were absolutely necessary for this line so I feel that Nikola has underestimated this in his book.
For a more elaborated review of Nikola's book I refer to a comment which i wrote on chesspub. Anyway this article is about regression-tests so I don't want to digress a lot about this one specific opening.
So let us return to the regression-tests and try to understand why there are very few interesting results. First I believe it is important to know that the old analysis on which the regression-tests are executed, are averagely made about 5 years ago. In 2016 I wrote in my article raise of the machines part 2 that the strongest engine improves at a rate of about 55 elo per year without taking into account the hardware. With the introduction of neural networks we see that this trend hasn't flattened, at contrary. In other words we can estimate that the level of my analysis has improved with at least 200 elo over the last 5 years and probably it is even much more.
Nonetheless we see that this increase of playing-strength has rarely (never say never) refuted any of my old refutations. I don't have a conclusive explanation for it but I do have a theory based on my daily work with the best engines. 5 years ago the engines were already extremely strong (much stronger than our current world-champion Carlsen) so the quality of the analysis I made at that time was already very good (this is very different compared to analysis made by humans in the era before engines existed). If 5 years ago an engine discovered that a line is bad then I notice that the best engines of today can't fix this anymore.
The increase of playing-strength of the new engines is mostly concentrated into the discovery of new much more complex refutations of positions which were before considered still fine. That is also the reason why last year I wrote in my article computers achieve autonomy part 2 that many dubious openings are disappearing from grandmaster-practice. More and more openings/ lines are theoretically at a dead end and those doors don't open anymore.
Finally I want to add that we should not despair about chess. The engine closed many doors but at the same time also opened many new ones. Every day I find new and beautiful lines. So it is mainly a matter of let go some old lines and be ready to adapt the repertoire when you discover something doesn't work anymore.
Brabo
Posted by Brabo at 09:51