Chess has an exceptional rich history which means for me a serious enrichment compared with other games. However to propagandize that this is applicable for everybody as Tom Piceu did in a reaction on my article to learn children to play chess, is incorrect. I remember that we once organized in my first club de torrewachters a quiz about chess-history in which I remarked that the knowledge of most participants was very limited.

Nevertheless I won't deny that there exists a niche-market for chess-history. I think for example at the set of books from Kasparov with the world-champions which were sold massively. Besides also many columns and websites exist:  Past Pieces, Inside Chess of the American GM Yasser Seirawan, the kibitzer or closer to home the Belgian chess-history or the extensive online archives of the CREB.

In my articles i never miss to add references to older material and that is an understatement if you look how many links per article are used averagely. Sometimes this is to show that something can be learned from what before happened on the board, see old wine in new skins. Sometimes I use it to explain how I arrived to some conclusions: see e.g Dutch steps in the English opening or the fake truth. Often it is just to illustrate something like in my articles chessintuition and excelsior. So I am a big fan of well documented work in which the writer shows he did (some) research and is reasonable up to date of the subject.

Therefore I was surprised to find out that many commercial publications little to not at all take into account the chess-history. An opening like the Kings-gambit was 300 years one of the most popular openings but in the recent work The King's Gambit of John Shaw this is barely discussed. On chesspub you can find multiple threads in which is shown, how few references were used to older material whereby often fair or not already longtime known moves are considered as new. The 2 knights game is a similar opening of which the first tracks already go back to end 16th century. In the very recent work a black repertoire against the two knights by Robert Ris again barely something is mentioned about this. The review of Arne Moll on chessvibes was surely deserved.

It is a fact that without research and references it is today possible to make and write high quality analysis. In a reaction on my article the progress of the engines I already recorded that I redo all my analysis made before 2007 as they became pretty useless due to the ever increasing strength of the engines. Even in more recent analysis I already detect ameliorations. So I can well understand why some authors (like Peter Lalic tells at chesspub) write their book based on the last megadatabase with an engine. However if a book is only covering the truth then it quickly becomes cold and unattractive.  Chess is more than just evaluations. These books are probably very good manuals to score many point in tournaments but their value quickly decreases on the long term. History is for me fun and the material also better memorizes when it is enjoyable to read.

Books in traditional paper-version surely are continuously fighting with space which means often many things must be cut out. I remember when I supported the analysis of the book 'Win with the Stonewall Dutch' that it was a continuous battle with the maximum allowed number of pages. 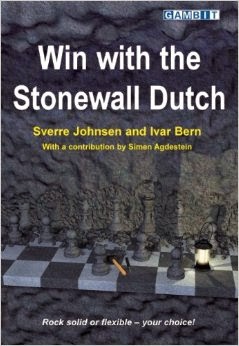 I didn't interfere in the concept or the choices but I did regret that little attention was given to the old traditional concept of Bc8-d7-e8-h5(g) as it was historical important. On page 25, 5th game the book tells us that this maneuver was before the standard method to activate the bishop but today considered as too slow and largely replaced by the modern plan b6. Unfortunately this is nowhere illustrated so I think this is a good opportunity to fix this gap here.

The last decades big steps were made to better understand how the human brain works although at the same time we do realize that psychology is a science still in its infancy. Exactly this poor and incomplete information generates lots of distrust for psychology. Undeserved as even today there is a lot to gain by considering psychology.

Since many years I have a big curiousity in better understanding the psyche. Maybe I even followed the wrong studies but at home there was no support for psychology so it became logically engineer. Anyway if today I notice an article or tv program about this subject then I won't ignore it and if combined with chess then it only strengthens my interest. Recently 2 nice articles on chessbase were published about the Einstellung effect: article 1 and article 2. In those articles is explained how earlier experiences often have an important influence in new choices which sometimes leads to strange errors.

In fact I already discussed some examples of this effect on my blog without using the scientific name. I am referring to my first article about chessintuition in which I showed that reproducing analyses not always gives better results than searching yourself the moves without any particular opening-knowledge. Knowledge is often incomplete or outdated. Our memory has limitations which leads that remembering things often partly succeeds or even completely goes wrong when variations are mixed. In my 2nd article about chessintuition part 2 I show the dangers of implementing earlier acquired patterns, themes because every small change in a certain position can be decisive if something works or does not work.

Many people answer wrongly on the last question when they hear the joke for the first time as they are misguided by the earlier questions. I believe that I also encountered something similar in my interclubgame against the Bulgarian grandmaster Dejan Bojkov (which i earlier already fittingly mentioned in my article camouflage ).

The summit which I once experienced was a recurring tactical motif in a combination of which I completely missed the switch-back. Probably I wasn't very concentrated as I still can't believe how I could play such blunder after quite some thought.