The recently finished top-tournament Norway Chess Altibox got very mixed reviews to say the least. The local hero, worldchampion Carlsen won as the organizers hoped for but quality and quantity was below the usual standard. Some players didn't hide their intentions to bypass the classical chess immediately for the armageddons. Unfortunately many of those armageddons were poorly played containing many blunders.

If the organizers had the intent to counter the death of draws in chess then they clearly missed the goal. Besides didn't Carlsen prove in the latest months that it is still possible to win against the best players? The cure made things only worse. In correspondence-chess however things look more grim at the highest level. I already wrote about that 4 years ago in computers achieve autonomy part 1 and it only became worse since. 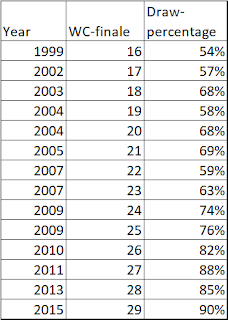 The 30th WC-final is still ongoing but currently the draw-percentage is 93% with 95% of the games played. A change of rules for the wc-finale is needed or it makes no sense to organize it anymore.

However as often we see that changes don't happen despite everybody is aware about the problem. Big changes in history happen mostly only when extreme situations are occurring. Also for most questions history has already a solution but we easily forget. The death of draws is nothing new. Already in 1900 so 120 years ago a solution was defined for the many draws in checkers (on 64 squares). Initially players were forced to play an opening of which the first 2 moves were selected in advance by lottery. Later from 1934 onward this was extended to the first 3 moves. As every opening must be played with both colors, nobody was favored.

This concept also exists for chess. You have the voluntary thematic-tournaments which often are organized specially for a certain festivity like I explained in my article a mini-thematic tournament but nowadays it is best known from computer-chess.  By the way the imposed openings were initially not used in computer-chess to counter the number of draws but rather to get more variety in the games. Definitely old chess-programs had the terrible habit to always play the same line see chesskids but also the brandnew Lc0 does the same see my comment at the bonusfinal from March 2019 between Lc0 and Stockfish.

Only after the superfinal of season 8 in which 89 draws out of 100 played games occurred, people realized that it is not enough to variate openings to get an interesting match. Since then more attention was given to the choice of the openings so we could see more decisive games. This is not something easy to achieve. Some complex openings for humans were easily neutralized by the best engines. On the other hand you don't want to select openings in which the win/ loss is already defined from the start. So one color should not get a too large advantage which makes the other color without a chance.

We also see that it becomes increasingly difficult to select interesting unbalanced openings. Till a couple of years ago it was sufficient just to avoid openings which were tactically refuted. Nowadays we learn by experience that strategically dubious openings often can't be used anymore for a test between the best engines. A nice example of this is what happened with the Grob : 1.g4 in the TCEC super-final of season 12. Both Komodo and Stockfish showed a large advantage for black (-0,9 till -1,46) after already the first white move and both succeeded to convert this advantage into a win.

Now I guess some people will not agree that I call the strategic dubious openings as refuted. Can you ever talk about a refutation when a human can't formulate a clear winning-plan? Except against the best players of the world, there will always remain practical chances. On the other hand who wants to play voluntarily with such handicap in standard games?

As a surprise-weapon strategic dubious openings will still be used. However engines will get better in autonomously refuting them so I do expect in the next years a decline of their popularity even in games played between amateurs. It is also the reason why I wrote last month in the article chess position trainer part 2 not to start playing the Dutch defense.