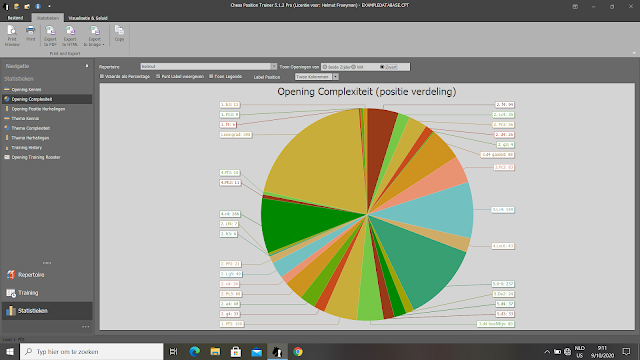 With just below 400 moves for the Leningrad one can wonder if I don't make my own life difficult. Don't I exaggerate with the number of moves? Another player also playing sometimes the Leningrad, told me that he plays the opening successfully without much knowledge of it. However he only meets players rated below 2000 and that is a very different type of chess. We can also see this in my 2 games. Besides 400 moves isn't much if we compare this with e.g. the book of Adrien Demuth. His book is 400 pages so 1 (half) move per page is just scratching the surface of the theory.
Besides I also think that I used chesspositiontrainer in the wrong way. In below screenshot you see there are today 3 options to study openings: systematic, random or photo training. I chose for systematic but that was clearly wrong with this opening. 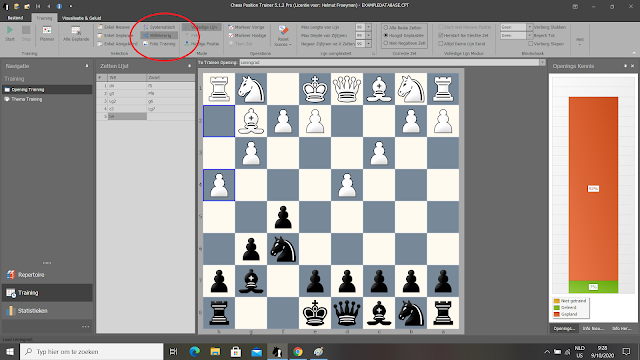 Photo training is just looking at moves. Maybe this works for people having a photographic memory but this doesn't work for me. Already at school I had to work a lot to learn my words of French/ English.... I only managed to do that by repeating them many times and writing them down while the new translated words were hidden. Therefore I prefer random training but with chesspositiontrainer random seems really random. This means you can easily get the same question 10 times on your screen while another only once. Studying 400 moves with this method takes ages. I also thinks it is a waste of time to answer 10 times the same question when you already had it right the first time
If you use systematic then you get all the lines exactly once (unless you made an error). This looks the most attractive approach but there is one big disadvantage. The lines/ moves are always shown in the same sequence. After a while I didn't even look anymore at the screen as I just played on auto-pilot. As a consequence during above games I didn't manage to reproduce in the middle of the sequence which moves to play also because there was no information where exactly I was in the sequence.
I think there are some important lessons to learn from these failures. Randomness is something we need to include in our exercises as in practice this also happens. I contacted the developer of chesspositiontrainer if he could prepare an update about his tool for this. It would be a big improvement if we can get a random selection but taking into account the correct answers already provided by the user.
A quick patch could be to split a big opening of 400 moves into smaller pieces so we have a lower probability of getting the same positions over and over again when we select the random option. However this is not ideal as you will have to lose time switching between the smaller pieces and there won't be a mix between them.
Maybe I should just accept it that I (as an amateur) can't learn such huge amounts of moves by heart at once. It is probably also one of the main-reasons why professionals rarely play the Leningrad. Only when they know in advance which line they will very likely play then it becomes interesting to give the opening a shot. An alternative for the practical tournament-player is explained in my article ideas part 2. A side-line is chosen to surprise your opponent but then we are really looking at short-term while I am more looking for lines which I play longer (multiple times).
Brabo
Posted by Brabo at 14:24