Beginning of this year I wrote in my article Papua New Guinea that I am playing online for about 20 years already. However only since a couple of months I also play online chesstournaments. This means earlier I only played online single games although also rated in most cases. I wasn't interested in online tournaments. There are almost no prizes to win. A standing doesn't mean much as you never know who or what exactly played. Besides I also liked it very much the liberty of single games. You decide when to start/ stop, how many games you play and how much you want to pause between them.

I never felt like I was missing anything but that was of course also because I was still competing all the time in regular on the board competitions. However while the lock-down got prolonged again and again, I started to miss more and more chess-competitions. So I started to wonder if I shouldn't make the step to online tournaments. Besides the lack of money was never a real argument to not playing chess online. I also think it is better not to give money as a prize for online tournaments as this will just attract more cheaters. There exists no bulletproof solution for online cheating today. Anyway I see some organizers have understood this already and now only give alternative prizes like a 1-1 training with a grandmaster or a subscription for an online service.

So during the lockdown I played my very first online chesstournaments. I was interested in blitz or standard. Rapid I never liked a lot (see e.g. rapidtournaments). Or you go for speed or you go for quality but rapid is just a boring mix of both. On the other hand I did quit playing bullet a few years ago. I consider testing my openings as a vital element of online chess and that is rarely possible in bullet as most of those games are just random stuff.

However I also quickly found out that the lockdown didn't generate a lot of possibilities to play standard chess online. Even the online Chessolympiad to which also a group of Belgian players committed, has been downgraded to an ordinary rapid. One of the few exceptions was organized at the beginning of the lockdown: sunway sitges online classical chess tournament but this model wasn't copied as again some cheaters spoiled it. Besides there is also less discipline online. If you play at home then it is much easier to drop out of a tournament when things don't go smoothly. As a consequence I couldn't find any standard online chesstournament for myself and so I just played blitz.

To get acquainted with the specific rules of online tournaments I started slowly by first only playing the online blitztournaments organized by my own club Deurne. For this I created a new account and accepted each Friday and Sunday their invitations at lichess. However after 1 month I had seen enough. Meanwhile I went from unrated to +2500 and I didn't find it interesting anymore to play again for the umpteenth time against the same players. From most players I knew by then the weaknesses in their repertoire as after each game I looked up how I could improve my game. This made that the gap each time became wider as the others weren't taking the blitz so seriously.

Next I searched for online blitz-tournaments of other Belgian clubs which allow external, anonymous participants. Again I created a new account and climbed from unrated to 2500. Also here I tried to collect as much information of the repertoire of my opponents as possible. This way I got motivated to study a modern line of the Berlin Defense and this became quickly handy online as it seems a pretty popular line at master-level. In other words I got hooked up. So when mid of June all these tournaments were suddenly not organized anymore I felt lost.

The reason for it was of course that the Belgian government allowed again to some extent on the board chess. For most clubs online chess was just a sweetener as it could never replace on the board chess. However today we also see that going back so soon to on the board chess was a risky decision and we are now struggling with a second wave of infections mainly around Antwerp but quickly also spreading to other parts of Belgium. I preferred not to take the risk so searched for alternatives online and as indicated by Loperke in a reaction on my previous article, there exist numerous of them at Lichess. Each hour of the day a dozen of new tournaments start.

Berserk means you choose to play with only half of the time allotted to get the extra possibility of earning an additional tournament-point. In tournaments of 5 minutes each this isn't so difficult but in tournaments of 3 minutes each then it means you are playing bullet (1,5 minute per game without increment) instead and that is a serious handicap. Some opponents know very well how to profit from such handicap as they choose for some very slow setups at that increases drastically the chance of running out of time or blunders. Therefore one of my little tricks with black to increase my odds when going berserk is only to click the berserk-button after white has played its first move. This way your opponent will most likely choose with white for the more regular d4/e4 instead of some slower things like d3/e3...).

Eventually in blitz/ bullet we see that the evaluation of an opening often plays only a secondary role and experience is much more important. It is afaik no coincidence that I score much better with some dodgy lines which already disappeared from my standard-repertoire compared to some of the mainlines I play which are considered much more correct. A nice example of this is Gligoric's line against the Spanish exchange opening. This line is more or less refuted but I scored in the last 2 months 31/37 with it. That is much better than the mainline I have been playing against the Svechnikov with which I scored only 9/16 or 130 TPR lower. I add the difference of TPR to counter any claims about the strength of the opponents. It is clear to me that people are much more at ease in my mainlines than in my dubious sidelines.

Some players are even willing to take some enormous risks to get their opponents on their turf. Last the Dutch expert Arne Moll played a completely busted line against me (1.e4 e5 2.Nf3 d6 3.d4 f5) which brought him at -2 if we look at the evaluation of the engines (so +2 for white). It was clear to me based on the speed of his first moves that he had played this position several times earlier already and therefore was also aware that a lot of hidden tactics were around to easily turnaround the game. This also happened in the game. While I was trying to avoid all the traps, I ran out of time and blundered. Next time this won't work anymore as I've now prepared an anti-dote for it. Anyway I gave this example to show that in such fast games it is often decisive to take your opponent into a position which you know much better.

Further there also are some curiosities at the arena-tournaments organized by lichess as in the hourly tournaments the pairings aren't happening via the classical Swiss-system. It is not that the highest half of the table is paired against the lower half of the table as usual but you get instead an opponent which is next to you in the standings. This leads to the perverse side-effect that it often makes sense to arrive late to such tournaments or even lose on purpose quickly you first game. This sounds absurd of course but as I am rated +2400 I get in the first round always another +2400 player if I arrive at the start of the tournament. Even if I win that tough game then it only generates 2 points. At that moment there already players which have won 3 games after going berserk each time so they are already at (3+3+5) = 11 points. Catching up 9 points in less than 50 minutes isn't easy at all. So nowadays I mostly arrive a minute too late which allows me to get often double or 3 times more points averagely compared to being mister nice.

Besides going berserk also means you get to play more games. In the end not each player plays the same amount of games which of course also largely influences the final standings. In other words you need to not only play well but you also need to use the right strategies. More than once I outsmarted IMs and GMs thanks to those sneaky tactics. During the lockdown you now see regularly some very strong players participating to these tournaments (even sometimes +2600 fide rated) as they also don't have the possibility to play on the board chess. Nonetheless despite those strong opponents I was able to win 14 already of those tournaments and achieved on top numerous honorary places in the last 2 months.

So in a relatively short time-span I've created a nice track record as in some tournaments more than 1000 players participated. However I also have to admit that things got a bit out of control as I spent clearly too much time online. Below you see how the number of online games exploded during the ongoing lockdown as I clearly missed on the board chess. 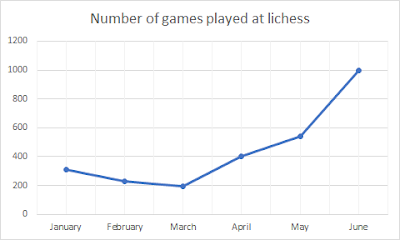 I played 1000 games in June. Each game lasted averagely 5 minutes so this made 80 hours of online chess. This is about almost 3 hours averagely per day. If you need to combine that with a full time job, a family,... then something went wrong. I was getting addicted to it so I realize that I need to slow down on it. Besides I didn't became famous by winning those tournaments either. Such hourly tournaments are like an assembly-line for which you get little or no recognition. Also the level of play largely fluctuates and to improve it is much better to play single games. So I agree with Loperke that there is a large supply of online tournaments but you better don't spend too much time at it. For sure it can never replace on the board tournaments despite what some people try us to believe.