A book about endgames.... Who buys that? And more important who reads such thing from cover to cover? The answer is simple: the player really eager to improve.

But then there also "good" and "bad" books about endgames like you have good and bad books about openings and the middlegame. What distinguishes now the book of De La Villa from other endgame-books? I will compare mainly with Nunn’s 100 Endgames, but also some other endgame-books (and their approach) will be covered.

The main asset of de la Villa’s book is that it is well structured and has a format of lessons connected per theme. It is built from the beginning till the end as a textbook, contrary to others which try to be complete. I like this as other (older) endgame-books miss often this thematic approach. It is much easier for the student to digest the content split in lessons of about the same size with their unique theme. Also good are the rules of thumb given in every lesson. You want the strategy explained in simple rules and not too technical with e.g zones drawn on the board which tell you when it is won/ drawn (as nobody can remember such theory). In other books you often get lost in too large chapters, with no refined content. Often you also feel jumping from one type of position/ material to another.

One example: when you are defending (with white) the endgame K+R vs K+R+f-&h-pawn we are told that the defending rook is best positioned in the "northwest corner (so around square a8). This was the very first time that I read somewhere this simple rule - it is no guarantee to draw - but just knowing it can improve your odds. This book is full of those easy to remember rules.

Also nice is that the book puts priority at the most common reached endgames. Often these are endgames of maximum 6 pieces on the board. Rook-endgames are considered as the most important ones which is no surprise. However the opposite bishop-endgames of K+B+2p vs K+B are second which is maybe less trivial. Besides this is just the endgame of which I had some first hand experience.

A nice supplement are the short exercises which are presented each time after some lessons. Sometimes the task is doubled by asking the question how to play the position with white/black when the pieces are moved 1 column on the board to the right or left.

As we have now all 7-piece endgames (Lomonosov and since beginning of 2020 also Chessbase), it is possible to practice them against perfect play (highly recommended). We are now having apps available for it as our current engines are very strong but not perfect yet.

A disadvantage - but at the same time also an advantage - is that it is a light book. It is not an endgame-encyclopedia, in other words the examples and exercises are limited to the bare minimum, which also means every exercise counts. Are there some real gaps in this book? Almost none but I still want to mention a few smaller ones.

A first critic is that in the first exercises there are some endgames about themes which aren't yet discussed. This seems to me a rather evident mistake which could've been avoided easily.

A second - much smaller critic is that the courses are sometimes deviating quite a bit of size. It is logical that some themes need to be explored more deeply but for people willing to finish 1 per day then it is annoying that sometimes you are finished in 15 minutes and other times only after more than a half hour. I think Nunn's 100 has more discipline with each time 2 full pages (often 4 positions) per item. However at the other hand I didn't have a problem to finish 1 theme per day in De la Villa which wasn't always the case with Nunn as his pages were often more filled (so heavier stuff to study).

A third - and more relevant critic is that there are some real mistakes in this book. As you can check nowadays endgames with the tablebases it is rather easy to detect some evaluations are wrong - especially in the exercises at the end of the book. It also happens some lines are wrongly evaluated but those are real exceptions.

A comparison with other more general books of endgames isn't so easy for me as I don't have many other general ones. I even had to look at one of my classics: Euwe’s Practical lessons part 4. After rereading it, I had to admit that Euwe was also a very good teacher and his evaluations were of a very high standard, so he could match De La Villa. I only consider De La Villa a bit better structured and easier to study (as he uses 100 easy chapters). So it was a close call. The comparison with the double of Cheron can't be made as Cheron is of another level and much more complete. Cheron is many times more serious analysis (definitely not to be used for training). Also the endgame-bible of Muller is not for training but more a detailed summary of the different endgame-categories. So you use this more as a reference to search a special endgame. Another real training-book is the Polgar's endgame-bible. However that is a book of just 4560 positions which are pure training without any explanations so didactically from a lower level. And Silmans Silmans Complete Endgame Guide is rather for the (absolute) beginner.

It is hard to compare with specific endgame-books (which focus on pawn- or rook-endgames) as they are specialized in it like Secrets of Pawn Endings, or Averbakhs / Nunns books about rook-endgames. But even then I still like De la Villa’s 100 EYMK as it is well structured and balanced. It is more profitable to have a few clear rules of thumb than have dozens of examples worked out in detail (it is easy to be overwhelmed).

In the interrupted candidates of 2020 one position from the book popped up in round 1 (Giri vs Nepomniachtchi). I also experienced once such moment: I lost a very difficult opposite bishop-endgame and had to wait till the 6-piece endgame became available to know the truth (as even the engines to day still make mistakes in it). I talk about the game shown below: 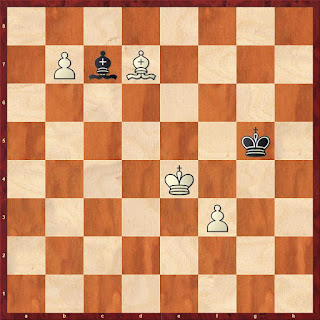 Conclusion: this book will let you improve. Let it be the only endgame-book you buy once every 5 years and read it every year. Success guaranteed!

PS at the top of the article you can also see a picture of the exercise-book. I didn't start yet at it but it are 300 exercises which for sure can be used to train. Anyway just start first with the 40 exercises at the back of this book.