Since 2014 IMF claims China became the biggest economy in the world. However today there is still a lot of discussion about the interpretation of their figures see e.g. Is China's economy really the largest in the world? .  Obviously I don't want to go into details here as I only touch the topic to address the huge transformation China made in the last decades. It changed from an underdeveloped country to a superpower which causes today anxiety in some countries.

Not only economically China made enormous progress. We see in almost any domain that the Chinese have acquired an important position. This is also valid for chess. Last year China obtained for the first time double gold at an olympiad but few will still remember that China was only some decades ago not much bigger of importance than a small country like Belgium. Fide doesn't offer much support but after some painstaking hours of research I was able to create some remarkable statistics about China. My first graphic shows the evolution of the average elo of the top-10 players during the last 3 decades. To compare I used as reference Russia (only from 1993 onward as earlier fide categorized the Russian players under the Soviet-Union). 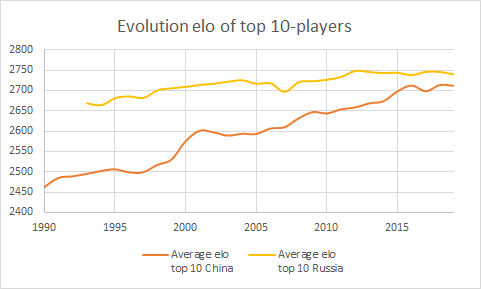 In my article about elo-inflation I wrote that many players are not aware about the fact that inflation is directly linked to the number of memberships. From above graphic we can clearly see this in the elo-evolution of the Chinese top-players compared with the Russian top-players. If we look at the rankings then this effect is magnified. In below graphic I show the evolution over time of the average-ranking in the world for the top 10-players. 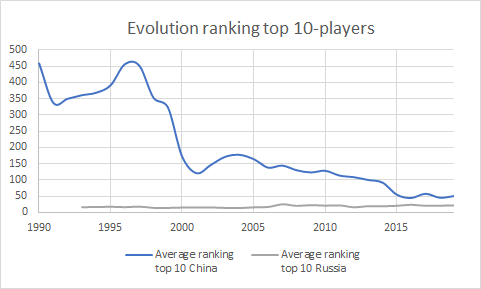 We notice that Russia is still number 1 today but China is very close. Besides the strongest Chinese player has now a higher rating than the strongest Russian player. Of course I talk about super grandmaster Ding Liren whom as the first Chinese ever broke the 2800 elo-barrier a couple of months ago. He achieved that in a remarkable way about which several journalists have written. Liren didn't lose any game during a period of 15 months. Finally the counter of undefeated games stopped at 100 against often very strong opposition. Out of curiosity I checked my personal database to find my longest streak of consecutive undefeated games. The maximum I recorded was 37 in the year 2011 but it only gave me a TPR = 2300 elo so many of my opponents were rather weak.

On chess.com I often solve some tactical exercises. The most difficult ones are sometimes very special positions. One of them I remember involved the theme of the queen-desperado. Below position is extracted from the collection of exercises I made on that site. In the solution there pops up 1 queen-desperado but you can even see 3 consecutive queen-desperados in the temptation.