In my previous article I gave a glimpse of about what is needed to become a world-class-player. This information is very hard to find. Only by an extensive research through the games of former world-topper Vladimir Epishin I was able to discover how enormous his opening-knowledge is. I summarized it by comparing the number of Vladimir's openings with my own's. It were about 25x more and besides Vladimir often was also much more versed of the theory which is something really astonishing.

Though I do work quite a number of hours myself at chess. So an interesting question is how Vladimir succeeds to maintain and remember so many different openings. Well the simple answer is that he only plays a selected number of openings during a period and he only maintains and studies those. So it is definitely not the case that I could encounter all possible 72 positions in our game. However only Vladimir knows which openings in his repertoire are active. I have to guess which means I only play safe by checking everything.

At that time I didn't get enough time for such elaborated study but there exist a couple of rules which help to improve the odds of a preparation. 60% of Vladimir's openings were single experiments. I guess professionals can become bored of the usual traditional stuff and like to spice up from time to time the opening. An extra bonus is that the opponent will be surprised. 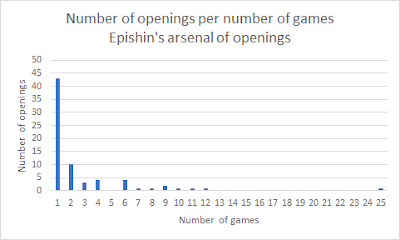 So only 12 of the 72 opening-positions were played by Vladimir in more than 5 games. Of course those 12 get a higher priority. Anyway even more important than the frequency is when an opening was played last. Vladimir plays no opening all his career. 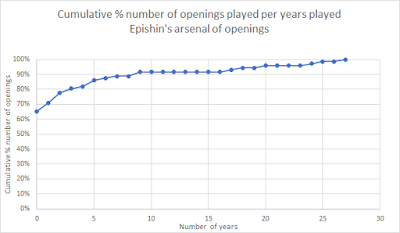 80% of the openings Vladimir played, were used maximally 2,5 years. That is a very short period of time which obviously was influenced by the many one-time openings. Eventually we discover that only for a limited amount of openings that their lifespan overlap. I made an overview per year of the number of overlaps to better illustrate this. 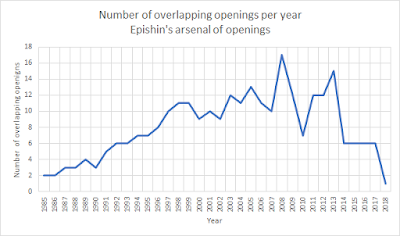 Obviously there are less overlaps in the initial and the latest years. The peak is in 2008 with no less than 17 overlaps. The average is 8,2 overlaps. In other words if you would know which 8-10 openings are today overlapping then you could just limit the preparation on those.

For sure the best is to start with the most recently played openings if time is lacking. However it is wrong to assume that by looking solely at the openings played in the last 2,5 years that you have an 80% success-rate to prepare the right opening of the game. Beside the lifespan of an opening, also the frequency of the opening must be taken into account. 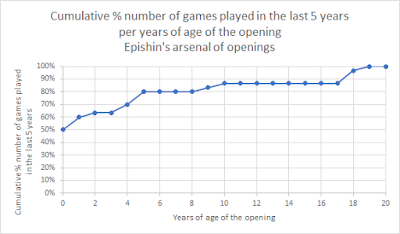 So in about 50% of his games this former top-player chooses for brand-new openings of his repertoire. I guess that preparations at his playing-level can be so detailed that it becomes almost mandatory to continuously reinvent yourself. We also see that we need to return 5 years back to get an 80% hit-rate of preparing the right opening of Vladimir's repertoire. The pareto-principle is definitely also valid for chess. Finally we also remark that in about 10% of the games, Vladimir likes to reuse an old love. Vladimir surely knows about the benefits of using old wine in new skins see part 1 and part 2.


So Vladimir cleverly uses all the assets of his arsenal of openings. It is still a lot of work to study and maintain but not something impossible for a professional. Anyway his approach stands diametrically opposed to how I play chess. Scoring is for me less important. On the other hand I can enjoy more the historical aspect of an opening (which probably explains partly why chess960 is still a small niche today despite some serious tries to get the public more excited about it like last by attracting former world-champion Garry Kasparov, see the current ongoing St. Louis-chessfestival).

That means I am for sure not a polygamist as a chess-player. I am a serial monogamist. Besides a few exceptions, I don't play several openings in parallel in the same position. So contrary to Epishin, you will see that the lifespans of my openings are almost never overlapping. If I make the same exercise for my own repertoire as I did for Epishin's repertoire then this becomes clearly visible. I checked each of my games played in the last 5 years how old my chosen openings were. 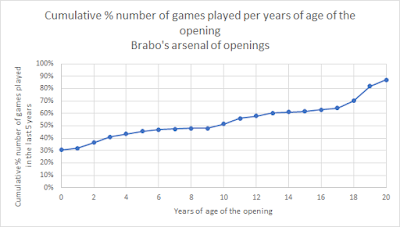 Contrary to Epshin many of my old games in the database (10 years and even older) can often still be used in the preparation. It is something which some opponents knowing me well, gratefully take advantage of. On the other the fact that I am using in 30% of my games fresh openings, shows that I do work at my openings. Openings which have shown weaknesses, are replaced immediately.


The game is stored today also in Ultracorr-x. An OTB-game of mine with the same opening which managed to get in the standard databases, is the one below against Emmanuel Bricard, at that time still an international master but today he is a grandmaster.