Last year I played 38 standard games of a slow time-control. I won 23 of them, made 10 draws and lost only 5. That seems a fantastic result but most of the games were played against weaker opponents. Besides only 11 were rated by fide so in the end I only gained a couple of ratingpoints. Many years already I can only play some small local tournaments to maintain more or less my playing-level.

Losing 5 games out of 38 is not much but each loss is one too many for an ambitious player. On the other hand losses are the best lessons to improve. That was part of the critics I received at chesspub because of my article to analyze using a computer part 2. Technically I make some high quality analysis but it is not clear how I learn something from it. Each game is unique (except in rare cases) so in each game new mistakes are made.

Of course something will be learnt from analyzing carefully games but often more can be achieved by looking to the total picture. Is there a common denominator in the mistakes? In my 5 most recent losses I noticed 1 important aspect. In each of the games I got very early into problems. In 2 games I even didn't survive the opening. 1 was already covered in my article evolution. The other was my game against Dries Janssen of which I already showed the final part in my previous artice.

It is not a lack of study from my side. Earlier in the same year I had lost another game in the same opening. Because of that I had made an in-depth study of all the current theory. Of 5.h3 there exists only 1 mastergame in the mega-database but still I hadn't forgotten to check that possibility. Unfortunately during the game I wasn't able to remember my notes from that particular line. There were hundreds of them and 6 months later you just forgot most of it. I expect nobody can fully remember such analysis including absolute worldclass-players. Besides my analysis of 5.h3 were very superficial as the line can't be considered critical for the evaluation of the opening.

No my mistake was of course being too predictable for my opponent. I stick too much to the scientific approach of playing chess so my opponents can easily prepare a very dangerous surprise. I did some research of my games to illustrate this more clear. I selected all my standard-games which I played against somebody that I had played already once before with the same color. For this type of games I could assume  my opponents knew in advance my personality and adapted their opening-strategy to maximize their winning-chances. After filtering, 146 of my 829 standard games remained. It proves once again what I already stated in my article  matches that our chess-world is small. From each of the 146 games I wrote down which person deviated first from our previous mutual game(s) and at which move. 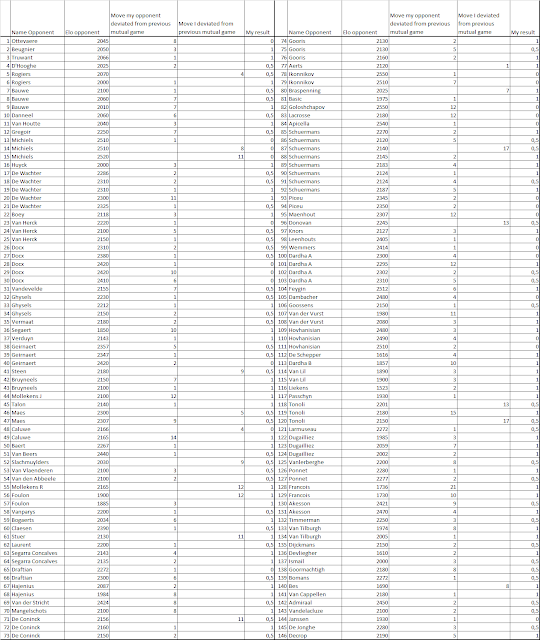 If we summarize then we see immediately a clear distinction between myself and my opponents. In 128 of the 146 games my opponent deviated first or in other words they tried to surprise me. Only in 18 games I was the one innovating from an earlier played mutual game. We also see this difference in the move where the game deviates from earlier play. My opponents averagely deviate at move 4 while I only do averagely at move 10. There is of course a connection between number of games and the move when the deviation happens. The next question is if my lack of flexibility costs rating points. Well I was surprised to find out that this isn't really the case. Below you see my TPR in the same rating-categories of my previous article.

Every medal has 2 sides. My lack of surprises is compensated by more experience. I also expect many players rather deviate to avoid a preparation instead of having made themselves a very elaborated preparation. It is again my negative remark of players being rather lazy than tired. Only for the highest rating-category there are doubts. The TPR doesn't decrease dramatically but I don't have a good stomach-feeling about my games. Especially Flemish top-players knowing me for decades will try to profit by using their preparation to counter my very narrow repertoire. So in that sense I do fully agree with the reaction at my article password of the Belgian IM Steven Geirnaert.

My article at the end of last year killer novelties indirectly proofs this with an example from my game against the Belgian FM Matthias De Wachter. Mixing openings is a necessity to improve which can also be deducted from  the almost 5 year old article the list of strength. On the other hand I do want to warn the reader that changing openings is not the holy grail either. In another loss this season the cause was definitely partly related by choosing a line which I hadn't studied earlier. I didn't know the mainline and my deviation was refuted by my opponent. So you can't play any unknown opening successfully to avoid being too predictable.