25 years I already open my games exclusively with e4. Also as long I answer 1.e4 exclusively with e5. In other words I have quite some experience with the position 1.e4 e5. It is therefore no surprise that some players asked for my opinion of the recently published repertoire-book Playing 1e4 e5 a classical_repertoire by Nikolaos Ntirlis. However to be able to judge a book, you first need to get the  chance to read it. That is a problem as I don't buy any books about openings since 20 years. Fortunately my team-mate Daniel Sadkowski was so gentle to borrow me his book for a week which allowed me to check the content. 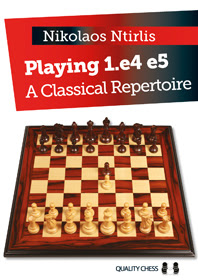 I know the author Nikolaos since 2009 when we were discussing furiously some analysis at chesspub forum lasting several months. Despite our initial disagreements things went afterwards much smoother between us. We both realized that we only were trying to search the truth of a position so no reason to feel emotionally bad about any critical analysis.

In 2009 Nikolaos was still unknown. Today he has built a solid reputation as opening-specialist. Playing 1.e4 e5 is already his 3rd opening-book and in the meanwhile his 4th about 1.d4 d5 is released see qualitychess. Besides any of those book was welcomed very positively. That is an extraordinary performance especially if you know that Nikolaos doesn't possess a fide-rating. By hard working, a lot of research and knowing how to maximally use the engines a lot can be achieved. By the way he also tests his analysis in correspondence chess with some decent success. This is enough introduction of the book. Time to evaluate the content.

Well I will be short. I warmly recommend this book to anybody interested playing this repertoire. The quality of the analysis is excellent and the light writing-style makes it very easy to read and digest. However for myself there was not much new. That is also to expect if you have 25 years of experience with the repertoire. This book would've been very useful for myself 15 years ago on my road to the FM-title. Meanwhile I made in most cases exactly the same conclusions as Nikolaos which is of course a compliment for the book.