Almost everybody frees some time around new year to visit their family. It is a very hyped period in which everything is about fortune and happiness but the reality is rather different. The preparation of the festivities is often creating a lot of stress and some family-members which you fortunately only meet once per year, still manage every time to irritate you. You can choose your friends but it is much harder to ignore family.

I am not going to complain here about my family. Especially my relation with my parents-in-law is very good. If they are visiting us in Belgium for a month during the summer or we visit them in Ufa as last 2 weeks, I am always surprised by their endless patience and concern about us. They clearly put their children and grandchildren in front of their own interests. I don't know if this is something typical for Russians but this is for sure not granted in Belgium.

Anyway despite good relations it is hard to have a conversation going beyond some chit-chat with the family. Most of us have very different interests. One likes very much football while the other doesn't care at all who won last the Champions League. A big exception are the foods and drinks which are normally abundantly available on any family-party. Also in Russia they know how to spoil their guests.  Of course parties have their own local characteristics. I noticed that the table always has to be overloaded by different dishes and drinks as you can see on below picture made at a visit of a cousin of my wife. 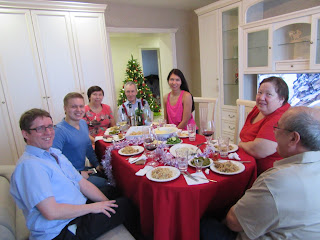 Last year we discovered an exceptional good restaurant and I had little trouble to convince my family-in-law to make a revisit. Afterwards I found out that Balkan Gril is according to tripadvisor at place 8 of best restaurants in Ufa. As a real bon vivant I enjoy such culinary excursions enormously. 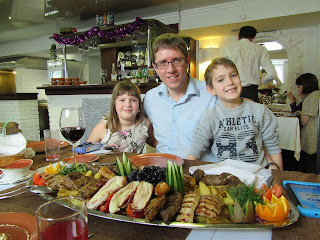 By the way you can find on youtube a funny clip about how the waiter serves the dish flambe.

So food and drinks play an important role at family-parties but it is of course more enjoyable if you have other things in common. Therefore I find it a good idea to try to find a hobby as parent which you can do together with the children. 4 years ago I teached my children the rules of chess (see cheating) and I am happy that today one of them still likes to play.

I find anything what my children do interesting but it is a bonus if you also like to do the same stuff. Besides my son very well realizes that he has a big advantage compared to the other children with a father able to help him any time with any problem (within the boundaries of fair play of course). Today we already see that he has a considerable lead with probably a temporarily biggest accomplishment of a first place in the final standings of the F-series of the last Flemish Youth-criterium.

Naturally I hope that we can play in the (nearby) future some tournaments together as some other families do in Belgium. On the other hand a confrontation at the board will definitely create some extra tension. I am not going to give presents as others do (see Familychess part 1) as I have to show the right example. On the other hand exchanging preparations or knowledge of openings will be obviously done extensively.