If we study openings then we obviously look first to what the theory tells us before we do any research ourselves. However what exactly is chess-theory? Wikipedia says that theory refers to what is broadly represented by current literature about openings but that is of course very vague. Besides today with the internet lots of materials are available to everybody which made the definition pretty useless. A better description is to define theory as a public database of quality openings. With this a new question immediately pops up as how do we define today what is sufficient quality to be considered as theory?

A few decades ago this question was easy to answer. The quality of the theory was closely connected to the strength of a player. Today this link is largely broken. We all possess very strong engines which play considerably stronger than the worldchampion. Everybody can with a minimum of chess-knowledge if sufficient time and money is invested, make high quality analysis. I even dare to add that the import of own chess-knowledge to the computer-analysis often decreases the overall quality.

This really stroke me when I compared my analysis of Jan Rooze his game played in Augsburg against Ivan Hausner with Jans analysis of the same game on the website of skdeurne. Qualitatively my analysis were clearly better although I hardly didn't do anything more than just reviewing the game for a couple of hours with an engine. Jan on the other hand, admitted afterwards than he (almost?) exclusively used his own analyzing skills. Besides such analysis have also their charm/ educative value as this way you get a better view on the thought-process of a (strong) player.

Another more extreme example was the Freestyle-victory in 2005 by 2 amateurs Steven Cramton en Zackary Stephen with respectively USCF ratings of 1685 and 1398, see chessbase. The name Freestyle already explains that anything is allowed during the game so also consulting engines. Now still their victory was regarded as an enormous surprise as with the relative slow tempo (1h + 15 seconds extra per move) it was generally expected that the teams with grandmasters and strong HW would win. Afterwards there even was a controversy about the authenticity of the team in which the winners were challenged to see if no strong player had helped them sneakily.

Correspondence is widely regarded as the highest quality one can achieve in chess. When I stopped with it in 2004, see this blog-article I already recorded that it was hard working to add something technical to the engines. Today it certainly didn't become easier which recently once again was proven by the new world-champion Ron Langeveld. He is the first world-champion in correspondence which never was a club-player. It is even more stunning if I tell that in the final the strong Brazilian OTB grandmaster Rafael Leitao participated. Ron explains in an interview that chess-knowledge can even be bad in correspondence-chess as knowledge is never complete. He promptly admits that without the usage of engines it is impossible to maintain the highest levels. This doesn't mean that there is no human involvement anymore but rather that the most important skills for making strong qualitative analysis have been shifted from chess-knowledge to computer-skills.

Despite these facts we still see today that many books sell better with a strong titled player as author (preferably a grandmaster) than without. A possibility to get something published as unknown player  is often to make an agreement with a titled player. The contribution of the titled player is often limited to bringing new ideas and reviewing while the lion-share is done by the unknown player. With the lion-share I mean all administrative duties, working out the details around the layout and text, checking every line with the engines or in a word all the necessary manual labor which are part of a good book. A number of books which I believe were published in this mode, are The Ruy Lopez: a Guide for Black (Sverre Johnsen, GM Leif Erlend Johanessen) ; Win with the Stonewall Dutch (Sverre Johnsen, IM Ivar Bern, GM Simen Agdestein); Grandmaster repertoire 10 The Tarrasch defence (Nikolaos Ntirlis, GM Jacob Aagaard).

Demand and supply so I understand very well why publishers are mainly choosing for authors with at least 1 titled player. However I don't sympathize with critics purely based on the fact that the author is not a titled player. This happened as well on chesscafe as on chesspub with the book Dismantle the Dutch Defense with the Dangerfield Attack written by the unknown player David Rudel. 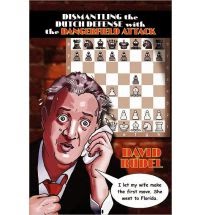 No also this opening-book I didn't buy (see for another example the article fashion) but I can add based on my experience that an early Bf4 against the Dutch is much more than just a move for amateurs. I get it rarely in practice but if it happens then I always have difficulties to get a comfortable position. I remember my game against Luc Saligo played in Open Gent of 2012 in which I surely experienced some problems in the opening.

We all realize this but still we see often today that an idea/ concept is thrown in the paper-basket purely because of the person. Pity as because of this we do miss chances to evaluate the real value of an idea. To conclude I want to quote the British top-grandmaster Mickey Adams which I found on qualitychess blog: "I look in all books which are sent to me for reviewing as even in Everyman books there is always something which I can use."