The exponential growth of grandmasters has generated an equal increase of all kind of (paying) chess-publications. They can't live from only the prizes of tournaments so they look for alternatives to earn a living. Despite a big illegal market we see there are still sufficient honest players willing to pay for the products. It is after all very attractive to learn a new opening by reading a book or more modern watching a dvd if this will let you score some easy extra points.

Especially the more modern version so the DVD is today very popular. Look at Chessbase newest products and you find a big variety of interesting stuff. It is very suitable for chessplayers as they are naturally pretty lazy so they want to see quick results by a minimum of effort. Besides also the author and the publisher loves the format. There is no need to spend months correcting text as a video can be recorded in just a couple of days. The only disadvantage is maybe that the author needs to travel and stay for a couple of days in the recording-studio.

We do notice of course a difference of quality between a book and DVD. I don't mean with quality especially the analysis but rather the summary, references and the didactic value are very strongly dependent of the format. The analysis is a matter of preparation and experience. Selecting the games, analyzing them and making a synthesis is done in advance. A writer has a bit more flexibility as he can easier add at the last moment a new chapter to his book.

A common question is how much experience must an author have about the subject he discuss. Very recently the strong Dutch grandmaster Erwin L'Ami published a DVD about the Dutch stonewall which surprised me. I play/ study almost 2 decades this opening and I never encountered any games of Erwin with this opening. This was also confirmed by checking chess-db. I found only 1 regular stonewall game played in standard conditions from 2016 which he even lost see Viktor Laznicka - Erwin L'Ami. Of course nothing about this was said in the commercial of the Indian IM Sagar Shah at Chessbase.

Now to avoid any misunderstandings I don't state that the DVD is bad. A +2600 player is perfectly capable to study independently a new opening, find new ideas and ameliorations without playing 1 official game with the opening. Besides the lack of experience can be mitigated by testing online. In my article Tom Piceu leads Bruges through 1st division I already mentioned that Erwin plays an enormous amount of games online. So Erwin definitely has something interesting to say about the Dutch stonewall for any average clubplayer willing to expand his repertoire.

On the other hand I don't want to minimize experience. Feeling wood is the ultimate test for somebodies repertoire. If you can refer to your own practice then this will always improve the story. A nice example is the series books of the strong Indian grandmaster Negi Parimarjan which received very good critics. The Dutch top-grandmaster Anish Giri even stated at Chessbase that Negi is crazy to be so honest.

Later it became clear Negi already decided earlier to stop (temporarily ?) to be an active professional player. After the series he played averagely only 9 games each year. Once he was the youngest grandmaster in the world so maybe another example of somebody started too young playing too much chess. It reminds me also of the Dutch grandmaster Karel Van der Weide writing a kind of chess-testimony see article quitting chess.

Players whom are "too honest" and at the same time active are scarce. It is a pity but perfectly understandable. I remember an old anecdote of the French grandmaster Anatoly Vaisser. After the publication of his book Beating the King'sIndian and Benoni everybody avoided in his games his beloved four pawn-system against the Kings-Indian. The only exceptions were players having read his book and they always chose the same boring anti-dote covered in that same book. Another disadvantage of playing your own recommended openings was mentioned at the Quality Chess blog. After the author lost in a critical line of the book, suddenly the salesfigures of that book started to plump very quickly.

A category of authors little or not impacted by above problems are non-professional players. Their books are not so popular as I already showed in my article theory but as money plays no role, we often see a much bigger affinity with the subject. An absolute model example is the recently published monumental work of the Romantic player Henry Bird written by the Belgian FM Hans Renette. 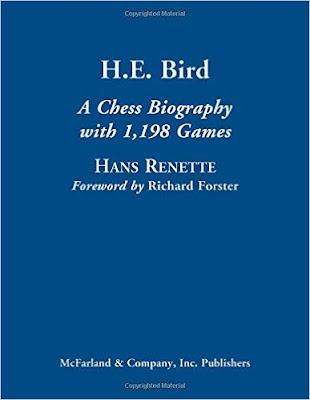 I strongly consider to buy this book when I finished Timman's Titans. His impressive article at chess.com has fascinated me. Only the fact that Hans worked 8 years at the book, makes it already something very special.