OK, after a long absence I wrote a new article for this blog. I must say - congratulations to our webmaster - as when he started with this project, I first thought - this will last 100 articles and then there will be no more ideas... No. Brabo covers a broad range of subjects: personal experiences at and next to the chess-board, family-life with a chess-playing son, some international news, analysis, novelties, tactics, endgames and psychology. Again well done Brabo. And all of this supported by games (believe me, it takes quite some time to post a pgn fragment with analysis).

So what can I add to all this?

As ex-player I only stay occasionally in this small world of chess. The most recent years I switched my focus from player to observer. More and more I concentrate on photography of chess-players. With my new camera I recently started to visit some tournaments. As ex-player - I was always preferring quiet conditions (even as kibitzer) - I am well aware of the nuisance a photographer can cause. The first five to ten minutes in game there is not much at stake, but when players are running out of time then most of them like to be undisturbed and fully concentrated. Then you don't want any busybodies around, especially some photographer spoiling the view with some close-ups.

I always make pictures without a flash - which in e.g. Cappelle-la-Grande with my old camera (Panasonic FZ100) often gave semi-successful pictures (read: just a bit too blurry) . My new reflex-camera (Canon Eos 6D) is much better but makes this typical click-sound for such type of camera: so one disadvantage instead of the other.

Now such camera does has a more silent setting. I do know that such click in the middlegame - and especially in timetrouble - is not appreciated. That is why I still keep my old camera - it is more quiet and has a good zoom-  so I can still make some good close-ups from 10-15 meters distance without the players know about it.

I am an amateur-photographer, so without any education. I can't compare my pictures with the ones from David Llada, Alina L’Ami or Lennart Ootes, easily selling their pictures to Chessbase or chess-magazines. Some specialized magazines and a book about my camera were a real eye-opener for me about the possibilities. Except that I make pictures without a flash, there is another restriction which I apply for the moment: I don't take dozen of photos about my subjects, but just try to get one good one in just a few tries. I also try to avoid « post-production ». More than playing with the auto-color or the auto-balance I don't use of Picasa/Google Photos. So no Photoshop or Lightroom for the time being.

At the purchase of my new camera I got some advice from Ronald Flou (member of the chess-club of Ieper), already an advanced photographer and often himself present at chess-happenings. If you want to look at his work then you should visit his public google+ site or his albums at KISK Ieper.

The switch from my old digital camera to the new Canon was an impressive uplift to a higher class of photography for me. The quality of the device is many times better. The shutter-speed, f-factor, ISO-factor invites to play and to use less often full-automatic settings. It even improved my method of working with my old camera and even the camera of my smartphone.

I don't want to delve into the technical details but I do want to show a few samples. Besides the earlier mentioned auto-correction a very easy adaptation - which improves a photo - is cropping (cutting). It ameliorates the focus and makes the photo look less sloppy - you only keep the essence. A picture hereafter (Giri and L'Ami in discussion at Wijk aan Zee 2017) could be cropped at the right sight to remove some garbage. 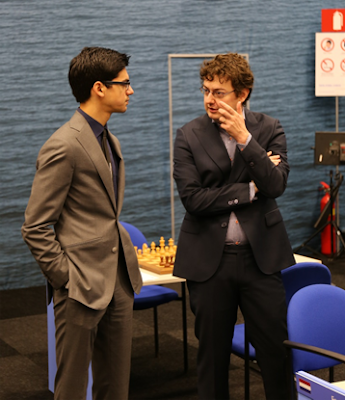 A chess-player is often a great subject but a picture gets something extra when you add a twist by suggesting something. Elements like "the lonely player", "win or loss", "doubt", "concentration",...

Below picture received the subtitle: “How to react when Anatoli Karpov is in the room and all attention goes to him – Ilya Smirin shows how”. At the last round the former world-champion started the games by beating the gong and of course everybody looked only at Karpov. All the players, having received all the attention in the earlier rounds, were suddenly invisible. I cropped a bit the picture (the opponent Eric Hansen is removed, to put Smirin at the middle of the picture). 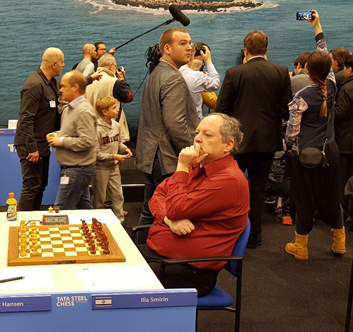 But a good picture doesn't need to be one of a world-class player - at contrary sometimes the best ones are just made in your own club. Below picture (adapted by Prisma of my gsm) I still like very much personally. 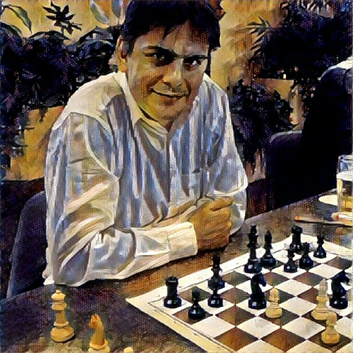 If you start yourself - and you want to visit a tournament in which you want quietly to make photos of rows of players at the board - then forget it. You must be lucky to have some players sitting five seconds at the board in the same position. A move is played, the clock is pushed, a move is written down, a player gets up, he stretches, drinks something, changes his position... a lot happens at the board. If you work with a long shutter-speed then you get blurry photos. So a good camera helps but you also need insight, eye for composition, the right light, a good setup and ... especially a lot of patience!