The vast majority of club-players have not played any official games in the past year. In recent months, Daniel Dardha was even the only Belgian to have played any competition at all. By the way, I don't understand how he got abroad because I thought that only essential travels are allowed. In any case, my last official game dates back to the last summer and then playing over-the-board-chess was by no means simple anymore, see the chess-microbe part 3.
I also have no idea when I will play chess outdoors again. If it has to be with a face-mask then I will decline it anyway and it looks like we will have to wear this for a long time. A couple of days ago the American virologist Fauci announced that face-masks may remain necessary in 2022. Apparently governments are slowly preparing the population for a very long period of corona measures.
In the meantime, I have to admit that I can also increasingly appreciate the advantages of not playing chess outdoors. In addition to money and time savings, I also love that I suddenly no longer have to worry about game-preparations (except some friends eager to beat me). I only play blitz online with very quickly changing and mostly completely unknown opponents. Moreover, I feel that this format is nicely fitting my skills. As an adept of the scientific approach see part 1 and part 2, I now reap the benefits of a narrowly well-studied repertoire of which I have been playing some openings for more than 20 years.
Even players with a fide rating sometimes a few hundred points higher than myself are suddenly no longer insurmountable. Many (very) strong amateurs find it difficult or impossible to adapt to the online conditions. The Dutch international master Xander Wemmers also admitted in an interview recently that despite his playing-strength and 40 years of chess, he does not have a polished repertoire. At over-the-board-chess he circumvents this by good game-preparations, but online it always ends in a punishment of opening-trainings.
So I think I can hold my own online, but some do even better. I also note that these online-specialists go much further in defining their repertoire. For me online chess has always been largely dependent on over-the-board-chess (see the (non-) sense of blitz part 1, part 2, part 3, part 4 and part 5). However, that never applies (or that is what I assume) for those online specialists. For them, only the online-results matter and so they are not concerned about the possibility to reuse something in over-the-board-chess. Besides, many of them are no longer active at all according to fide.
One of the most typical and successful examples of an online-specialist is yanvar at lichess. He is a very active player as he played about 15,000 games (blitz only) at lichess in just less than 2.5 years. In addition, his online lichess rating constantly fluctuates between 2500 and 2600. I meet him regularly and every time I suffer. My score of 1 out of 7 is in any case far below the expected score. The games always follow the same pattern. Yanvar chooses a very small variant in which he specialized and I cannot get through the opening unscathed in half of the games. For example, with black he invariably aims for the next position that arises after only 6 moves. 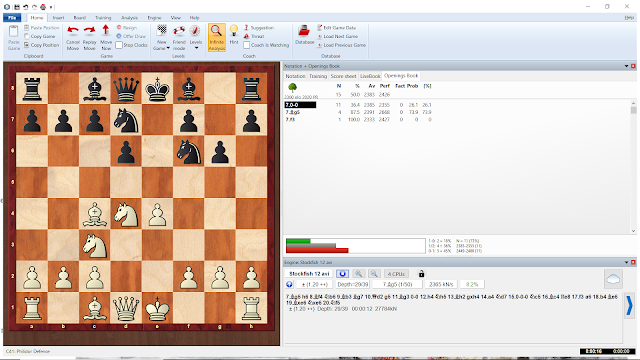 So according to my opening book you can only find 15 master-games in the mega-database with this position. If I then look at which games those are then 4 games played before 1997 immediately stand out. In each of those games the black player is the Russian international master Igor Yanvarjov. There is no information about Yanvar on lichess but everything tells me that we are talking about the same person here. 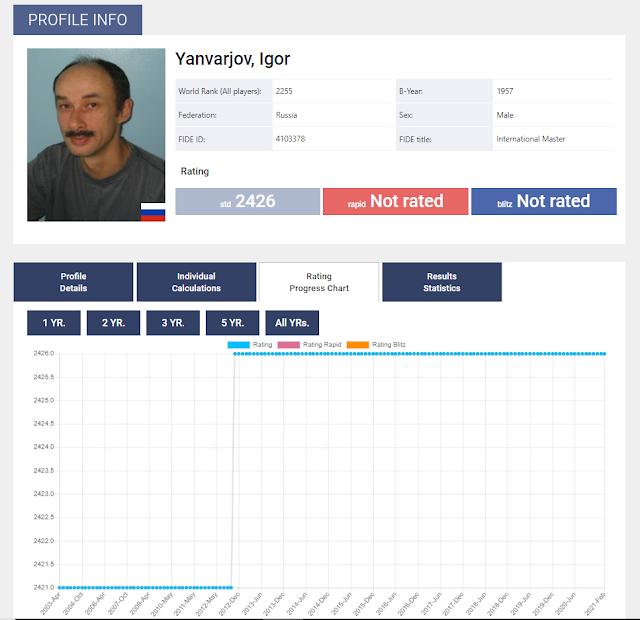 Igor has apparently not been playing fide-competitions over 20 years (with 1 exception in 2012). Then I am very surprised to see that in combination with an age of almost 64 you can still flirt at lichess with a 2600 online rating. Who is this Igor Yanvarjov? Could it really be that chess-talent can be found everywhere in Russia?
My Russian wife soon helped me out to reveal the mistery. After some googling she discovered on some Russian chess sites that Igor Yanvarjov is a very big name in the Russian chess world. He is much more than just the international master title. He is an absolute top coach and has worked with the chess schools of Efim Geller, Anatoly Karpov, Garry Kasparov and Tigran Petrosian. He was also a personal friend of the latter, so it is not surprising that he even wrote a book about him The King's Indian According to Tigran Petrosian, which was translated into English in 2019. 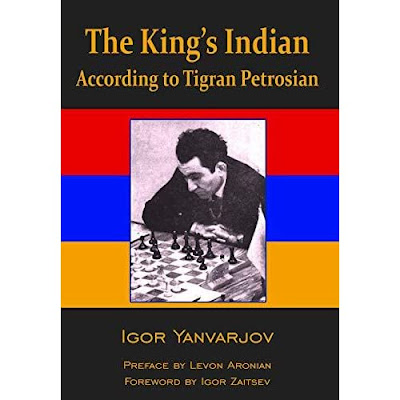 Several of his students have since become grandmasters. By the way, you can still contact him for lessons at the Karpov-school. You can read a lot more about this extraordinary personality in the report of his 60th birthday because it is now necessary to return to the theme of this article and that is of course the expert. So why exactly do I consider Yanvar a model-expert? We start by downloading all lichess games from Yanvar thanks to https://lichess.org/games/export/yanvar (see also my article lichess) and then filter the games on our previously mentioned position. The result is astonishing. I extracted 667 games from Yanvar in which he played that particular position. With black he scores 65% so close to what his rating expects him to do. However, it gets even more interesting when we look again at the expert-games of the last 3 months played at lichess. Filtering on the same position shows that 1 name prevails: Yanvar.