It becomes more and more clear that we won't be able to play regular on the board chess for a long while. For me chess isn't worth taking huge health-risks nor can I afford it to take sufficient precautions to play chess safely. However there aren't many alternatives for playing chess. We can't consider online chess seriously as you never know who or what is exactly playing against you. Last couple of months one after the other cheating-scandal occurred to that extent that even mainstream-media like the guardian reported about it.
Maybe we should for online chess just admit that cheaters can't be avoided and therefore we stop trying to block engines. Then everybody will have the same tools and on top the games will become much better played and more interesting. This sounds to me much more educational than the countless blitz- bullet-games which are mostly a waste of time.
On the other hand I don't think chess is fun anymore when all games are drawn in a tournament due to everybody using extensively engines to select moves. That is exactly what happened in a recently finished top-tournament at iccf: Joop van Oosterom Memorial. All 28 games were drawn despite a lot of combativeness and games played out till the end. Many games ended in a repetition of moves. 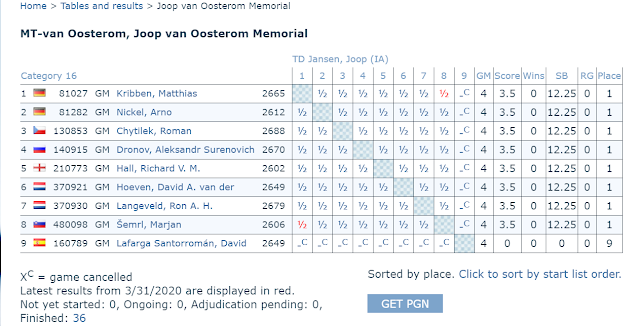