2020 had to be the year of my comeback to a full-active player but the corona-crisis decided differently about it. Last decade I limited my chess-activities to about 10 fide rated games per year so that I would have always sufficient time to spend with my children. However small kids don't stay forever small and at some moment start to do things independently. Therefore in 2018 I decided that it didn't make sense anymore to just watch and wait while they play chess. Instead I joined the rapidtournaments at which my kids participated. Last summer I made the next step by playing a 9 day-tournament together with the family in Belgium. Next I joined the team of my son in the interclubs of Netherlands and begin 2020 we made the last step by playing with the family a tournament abroad: 9 rounds of standard chess in Cappelle La Grande/ France.

In the past I played quite often chess without the family but I prefer to limit or even avoid this in the future. I have already a very busy schedule so it makes a lot of sense to play only together chess especially standard games. For 2020 I thought 50 rated games so about 5 times more than previous years should be manageable this way. Initially things were going smoothly till of course this corona-thing jeopardized our plans. Currently it is unclear when we will be able to return to normal chess. I am neither desperate to accept the very special conditions of the Bruges Masters/ Belgian Championship. It seems that I am not the only one as even the very low maximum of 120 entries is still not achieved after 3 weeks. At schaaksite some players think that it will take more than 1 year before we can again play normal chess. This would only be possible when a vaccine is available world-wide or when most people are immune.

Anyway I was't able to forecast such scenario at the beginning of this year so at that time I still was looking forward to play a lot of chess which was initially indeed happening. Because of that I thought I should be more up to date about the most recent theoretical developments. In the past I didn't bother much about being surprised about a modern line which was totally new for me as I only played few games per year. However the prospect of experiencing this very frequently didn't feel at all enjoyable.

Top-players filter and analyze daily any played (top-) games to keep their repertoire up to date but I don't have the time for that as an amateur. Besides I doubt that I would want to do it even if I would have time for it. In my article fashion part 2 I advised as a quick fix chesspublishing.com and chessbase magazin but which one should I choose? I had some experience with Chessbase Magazin but not with chesspublishing.com. However end of last year the Belgian FM Frederic Decoster told me that he is already for some time a subscriber of chesspub and he really enjoyed the monthly updates. This convinced me to give it a try and I don't regret it at all.

First if you are only interested in openings then you will for sure get more for your money at chesspub. Chessbase magazin costs about 100 euro per year for which you get maximally about 20 x 6 = 120 games/ openings annotated/ discussed. If you subscribe to all 12 opening-sections of chesspub which is 90 euro then you get about 85 x 12 = 1000 games/ openings annotated/ discussed and this doesn't include the automatic access to the archives which goes back 10 years. Ok quantity is not necessarily better than quality but even the quality of the chesspub content is more than acceptable and sometimes even excellent. 10 cent per game/ opening at chesspub is ridiculously cheap as an author can't open even a database for such money never mind about writing any comments.

So as a new subscriber I got access to the archives till 10 years back which even allows me to claim that I only paid about 1 eurocent per game/ opening. How in earth can such commercial model work all those years as even a minimum of effort will take at least a quarter of an hour. Besides looking at some analysis I am sure the annotators spent often several hours at it. I am not surprised that some contributors gave up after some time. I don't think you can ever become rich by working for chesspublishing.com as I can't believe they have million of customers. I only want to say that it is financially a no brainer to be a subscriber of chesspub.

Nonetheless I also want to discuss the quality of the published analysis in this article as I think it is also interesting to know if we should spend time reading/ studying the content. While we are talking about time, I also want to make the remark : "don't do what I did by paying only 60 euro so trying to save 30 euro as I thought 6 out of 12 opening-sections are sufficient for me. By paying the full 90 euro I could've downloaded all the files at once automatically in one pgn. However I had to download each month manually and then still rearrange everything. If you know that it takes about 20 seconds per file then you can calculate for yourself that 12 x 6 x 10 = 720 files meaning that I needed 4 full hours for this very annoying task. It is not the first time that I experience saving money isn't the smartest choice.

Anyway it is time to check what we exactly got for the few euros we have spent. As I only subscribed to 6 out of 12 opening-sections, I can only review those 6. I think it is also fair to only look at the updates of the last 12 months. The current annotator shouldn't be judged on the work of the previous one. It is also not fair to check analysis of 5 years ago with the current engines which are several hundred points stronger now compared with the engines at the time the author could use. Nevertheless I notice each contributor has its own style which often leads to very different approaches how to select and annotate the games. Below I show a summary with a final score for each sections. 10/10 means that the analysis is made at the level of (top-) correspondence-level. 1/10 is what you can get by pushing the button "create automatic analysis by the engine on your pc. Looking at the price we paid then even 1/10 would've still be acceptable so I am only showing the scores to differentiate between the sections. To be very clear every section has an added value for the subscriber. 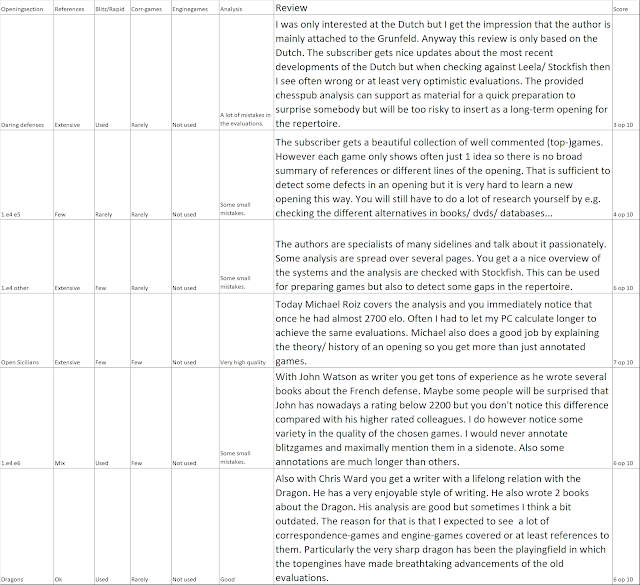 The maximum score I gave was 7/10. I am sure that the Israelian grandmaster Michael Roiz often spends several hours at annotating his games. I find it unbelievable that he is willing to do such efforts for probably peanuts. One recurring gap I noticed are games played by engines while I mentioned already several times on this blog that in the future those games will become increasingly relevant for the development of openings. Neither do I see many references to correspondence-games. I can understand this for some openings but in others all important discoveries are happening nowadays in correspondence-chess. I also get the impression that the writers aren't fully up to date with the most recent engines or tools (checking the age of some of them then maybe this explains why) as I doubt somebody already uses Leela (which is today absolutely indispensable for annotating games).

Basically I annotate my games much more thoroughly sometimes even spending a week or more at one game. It goes without saying that I can't demand such efforts from the writers. Besides chesspub is still very useful for me to use during a game-preparation when I wasn't able yet to make a serious analysis of a specific system. It is also nice to be warned in advance of some new trends or worse some refutation in the repertoire. This all sounds very nice but how relevant are the chosen games for my repertoire? To answer this question I checked my last 100 standard-games of which the opening matches the 6 subscribed opening-sections. Next I checked for each of the 100 games if the opening was covered by chesspub or not in the last 10 years. If 1 critical line was mentioned then I considered this as yes = included. Just stating the move is possible without any further comments I consider as insufficient so no = excluded. 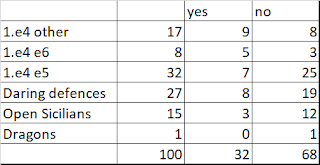 32% doesn't seem much but the theory is nowadays so vast and extensive that this is a pretty good result. Maybe I should've selected the section "Flank Openings" instead of "Dragons" but best would've been a subscription to all of them of course.

I expect that chesspub will not give to everybody the same experience. If you only play against -2000 rated players and you always want to leave the theory as fast as possible yourself then a subscription to chesspub will likely be nothing more than getting a nice collection of annotated recently played games. I guess from +2200 it really comes interesting as at that level you will start to prepare for openings and play/meet more mainstream-openings. For correspondence-chess I believe the analysis is too light, except maybe the section "Open Sicilians". Last week I discovered while preparing this article thanks to chesspub a gap in my repertoire. I consider my subscription for sure successful.


PS. I just noticed after I made the translation to English of this article that the new update of "Daring Defenses" includes some games played by engines. I guess this probably has to do with the fact that not much other games were played recently due to the corona-crisis. Anyway if the writer can do that more often then I would definitely find this positive and as such would increase his score with 1 point. Besides as a general advise I think there is some low hanging fruit for several authors by just looking more often to correspondence games and engine games just like downloading the most recent version of Leela/Stockfich for free.
Posted by Brabo at 11:36