In 1983 the French Laurent Fignon won his first tour the France. At that time I was only 7 years old. In the next weeks me and my younger brother biked around the house of our parents while shouting Fignon. 6 years later our idol failed miserably in a nail-biting time-trial at the last stage of the tour by relinquishing his first place at the American Greg LeMond. At the finish line it became clear he lost the tour by only 8 seconds. That was and still is the smallest gap ever between the first 2 finishers in the tour the France. Laurent didn't want to be updated about the time-differences during the time-trial but he clearly regretted that decision afterwards.

After that I never had anymore idols. I believe idols are most likely something for younger children as they still have huge expectations and dreams of their own life. Also at chess we see this phenomenon today. Some players hunt for signatures and photographs of top-players see e.g. this Chessbase-article of last year about Daniel Dardha belgian champion at 13. We see Daniel on pictures with Magnus Carlsen and Garry Kasparov. I guess today it is rather Daniel himself being asked to pose with his young fans (or sometimes not so young anymore).
If you ask any random chessplayer which world-champion made the biggest impact on chess then most likely you will get the answer the person whom was/ is world-champion at the time he/she started to play chess. For some players this will be Robert Fischer. For others it is Magnus Carlsen, Vladimir Kramnik, Garry Kasparov or Anatoly Karpov. Of this last worldchampion I still have a nice picture, made in 2004 at which I am also on. This picture was made rather unexpectedly. At that time I played for the the French team Lille and we were going to start with the finals of the top seize (highest division of the French interclub) organized by Belfort. In advance each team was invited at the town-hall and at this special occasion Anatoly was guest of honor. Our team-captain didn't miss the unique opportunity to put us all together for a picture. Initially I thought I lost the picture but fortunately my father was still able to find it back on his old computer. 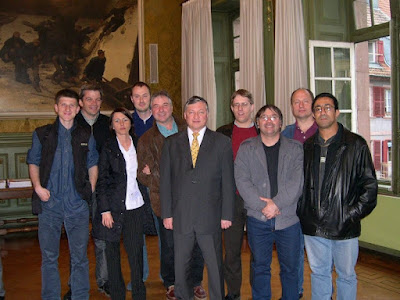 We see Anatoly in a nice suit standing in the middle. At the very left we have a still very young Tigran Gharamian becoming that same year international master, a few years later in 2009 grandmaster and in 2018 even champion of France. It was a very interesting and enjoyable period for me. Once I hope to come back and play again maybe with my son Hugo.

In Belfort I played a few boards away from greats like Kramnik and Anand but I don't have any pictures of that. It is a missed opportunity although I am neither the person to play paparazzi. Anyway I don't think it is wise to idolize people which doesn't mean that a nice picture can't be fun.

That was also the case when I last got the unexpected chance to meet the worldrecord-holder of blindfold-chess Timur Gareev just before the lockdown started at the krokustournament of Gent. I suspect that I was the only one recognizing him at the tournament but internationally he is a very known person in chess circles. In 2016 he improved the worldrecord blindfold-chess to 48 boards simultaneously which gave him a place in the guinnessbook of records. However there is more to tell about this very interesting personality. I am thinking about playing chess while skydiving or the mad-race at the American championship of 2019 (of which you can still view the funny images at twitter). So I was very pleased when he not only wanted to play some chess (a bulletgame which of course I lost - no surprise as one day earlier he won the Rapid of Cappelle La Grande in front of some strong grandmasters - but which everybody in the room enjoyed as after mutual promotions we were suddenly playing with 4 queens on the board) but also agreed for some pictures like the one below together with me. 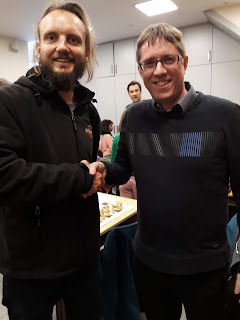 I would've enjoyed more and longer games but I understood he was just passing through so he had other priorities. Anyway only 2 day ago I was already lucky to play a long and even official game against another idol/ grandmaster.

Only recently I mentioned that I had bought and studied the book the Modernized Dutch. Well the author of the book, the French grandmaster Adrien Demuth participated at Cappelle La Grande. I hoped to meet him at the board and indeed this happened in the last round.

That morning I wondered if it would be ok to let him sign his own book just before the game to maybe get more easily a draw from the grandmaster but in the end I thought this would look somewhat too childish. However during the game at move 20 suddenly the grandmaster proposed himself a draw (beside the rules of the tournament allow only after move 20 to propose a draw). What to do as that was exactly what I wished for in advance? Indeed I refused the proposal but only after 20 minutes of reflection despite that I had only 1 move see chessbomb.
[Event "Open Cappelle La Grande 9de ronde"] [Site "?"] [Date "2020"] [Round "?"] [White "Brabo"] [Black "Demuth, A"] [Result "1/2-1/2"] [ECO "C60"] [WhiteElo "2251"] [BlackElo "2500"] [PlyCount "49"] 1. e4 e5 2. Nf3 Nc6 3. Bb5 a6 4. Ba4 g6 {(Adrien plays many systems including the one chosen in this game. I had till midnight prepared answers for all of his systems I had found in the database.)} 5. O-O {(First c3 and later 0-0 can lead to very different positions. In my preparation I got lost in the complications and even during the game I was still having doubts. Probably this caused Adrien to think that I was not familiar with the opening which obviously wasn't correct.)} 5... Bg7 6. c3 Nge7 7. d4 exd4 8. cxd4 b5 9. Bc2 d6 10. h3 O-O 11. Re1!? {(In my notes of 2013 I had first Nc3 which is indeed more accurate. I couldn't remember it during the game as I had checked hundreds of moves while not studying them by heart. Fortunately black doesn't take advantage of it.)} 11... Bb7?! {(Nb4 is here much stronger.)} 12. Nc3 Rc8 13. Bf4!? {(I want to transpose to my analysis of 2013 but white has interesting alternatives like h4, Ne2 ... which maybe are even a little stronger.)} 13... Na5 14. Qc1 {(I managed to transpose. In 2013 I recommended Qc1 but Leela prefers Bd3.)} 14... c5 15. d5 {(A novelty and an amelioration on the still known Bh6. This was of course still part of my analysis made in 2013.)} 15... Nc4 16. Bd3 Ne5 17. Nxe5 dxe5 18. Be3 f5 {(In my blog-article "Fashion" I had evaluated exactly this position as white having a clear advantage. Meanwhile Adrien realized that he felt into a piece of my opening-preparation/ knowledge.)} 19. f3 Qc7?! {(Black wants to keep the queen-side flexible but this only aggravates the problems so c4 was necessary.)} 20. Be2 f4 {(In Cappelle La Grande you can only propose a draw after 20 moves which Adrien did here promptly. I can only play 1 move here but I still spent 20 minutes as it is not everyday that you can make a draw with a grandmaster rated 250 points higher. In the end I managed to convince myself that I would regret afterwards the draw by not at least trying to win such nice position which is probably technically already won. This was the first time that I refused a draw from a grandmaster in my career.)} 21. Bf2 g5 22. a4 b4 23. Nb1 Ng6 24. Nd2 Rf7 25. d6 {(The remaining part of the game was covered in my article "Swindles part 2" so I stop here as it is also not relevant anymore for this article.)} 1/2-1/2
I guess this long hesitation probably costed me a half point. Obviously I refused the draw not without a good reason. I had prepared the game the evening before till midnight and that allowed me to use some piece of analysis till move 18 which I had published on my blog in 2014 see my article fashion. Indeed analyzing your own games for many hours, will sooner or later be profitable especially when your opponent doesn't follow your blog.

I don't like to worship chess-idols or even more generally spoken any idols but that doesn't mean you can't have some richer experiences by meeting some people. Eventually we do control for a big part our own lives. Life is a big adventure but you still need to dare things to make it interesting.