My chess has some serious handicaps as I don't vary sufficiently my openings and also many of those openings can't stand the scrutiny of the current best engines. Therefore I always try to compensate those handicaps by preparing my games very extensively. On the blog I've shown many examples about how I taught myself different techniques to transform the preparation of a game into an ultimate weapon. I guess that many professional players aren't so advanced in that domain. It is a discipline based on a strong organization, hard work and an eternal quest for improvements. In other words most players hate it and I assume this is also the reason why many players wrongly see my preparations as some kind of proof that I posses a very extensive or even absolute opening-knowledge.

It is no surprise that in 90% of my 124 games of which my opponent was aware about my legendary game-preparations, my opponents chose to deviate first from their earlier played games purely to avoid my preparation. So the number of games as discussed in my article novelty seeker part 2 are very rare. I find this a pity as I wrote in a reaction on my article surprises part 3 as the games would be theoretically much more interesting when both players could prepare themselves. I remember one anecdote about 2 players living around Bruges making an agreement to play 1 specific opening but that is the exception on the rule. Most players prefer that the fight happens on the board and aren't interested in the academic evaluations of an opening.

The next question is of course then if my opponents harm themselves by playing something of which they have no experience. Well I have shown in my article the expert that a preparation of a game almost always is stronger than an expert. Nevertheless when looking at my own games, even when my opponents know my blog/ reputation then still 40% doesn't prepare anything at all. Of course there is sometimes very little time but in most cases they don't care. It just proofs once more that many players are extremely lazy but maybe I am too harsh here as probably chess is just another game for them.

However this also means that 60% of my opponents knowing my reputation, do check at home how they can surprise me. These are the difficult games for me. Even if I survive the opening then often I have a big time-disadvantage. I experienced this fate several times this season. Besides I also start to get more often problems remembering my analysis. I can accept that I forget some old game-preparation at which I spent only a few minutes but it is more painful when you forget something which you studied in detail at home. Last year such scenario happened already 8 times and at one period it even occurred in 3 consecutive games I played. I discussed the first position already in my article surprises 3. End of 2018 I had spent a lot of hours at analyzing the opening but during the game I couldn't remember anymore one very crucial detail.
[Event "Interclub Opwijk - Deurne"] [Site "?"] [Date "2019"] [Round "?"] [White "Bomans, A"] [Black "Brabo"] [Result "1-0"] [SetUp "1"] [FEN "rnbqk1nr/ppp3b1/4p2p/6p1/3PPp2/1B4B1/PPP2PPP/RN1QK1NR w KQkq - 0 9"] [ECO "A80"] [WhiteElo "2260"] [BlackElo "2301"] [PlyCount "12"] 9. Qh5+ {(There is only 1 game with this position in the megadatabase which was played in 1999 and continued with Bxf4. However Qh5+ was still part of my analysis created in 2018.)} 9... Kf8 10. c3 fxg3 11. fxg3 Qe8 {(In the game I played Nf6 as I forgot my analysis and quickly got a lost position.)} 12. Qe2 Ke7 13. Nf3 Kd8 14. O-O Ne7 {(Here my analysis ended and black is ok.)} 1-0
The next game was played in the club-championship of Deurne against Marcel Van Herck. Marcel normally doesn't prepare his games but for me he likes to make an exception although definitely not more than an hour. Anyway he makes sure that he avoids my preparation although this time he almost didn't manage. I had checked the played sub-line in my preparation but not the sub-sub-line he played. I found it unfortunate as I had even studied that little line extensively a couple of months earlier. However again I couldn't remember it at the board.
[Event "Klubkampioenschap Deurne r4"] [Site "?"] [Date "2019"] [Round "?"] [White "Van Herck, M."] [Black "Brabo"] [Result "1/2-1/2"] [SetUp "1"] [FEN "rnbqk2r/pppp2pp/4pn2/5p2/1bP5/2N2NP1/PP1PPP1P/R1BQKB1R w KQkq - 0 5"] [ECO "A10"] [WhiteElo "2050"] [BlackElo "2301"] [PlyCount "12"] 5. Qb3 {(In the megadatabase there are only 3 games with this position.)} 5... c5 {(8 months ago I had studied this position and my engine had discovered the strong novelty c5. However I couldn't remember it during the game as I didn't expect this line in my game-preparation. I continued with the weaker Bxc3 and only achieved equality after Marcel relaxed a bit.)} 6. Bg2 Nc6 7. d3 O-O 8. a3 Ba5 9. e3 d6 10. O-O h6 {(Black has a very flexible position in which he has decent chances.)} 1/2-1/2
A week later it was again the same bad news due to my failing memory. I am friended with the Belgian FM Marc Lacrosse for already 2 decades so Marc knows he better doesn't allow me to play too many moves of my preparation. In our most recent game played in the Dutch interclubs he chose for that reason to experiment. Of course he was surprised after the game to hear that even that I had analyzed in detail at home but I could only reproduce partly the analysis. 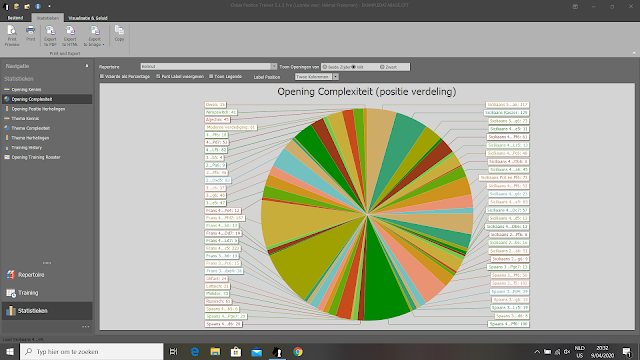 The opening-lines of the positions discussed above in the article are very rare: of the first one you can't find any games in the megadatabase, of the second one there are only 3 games in the megadatabase and of the 3rd one there exists again no games of it in the megadatabase. It just proofs how thoroughly my analysis are nowadays but simultaneously it became impossible for me to remember everything as am amateur. It would be even anti-productive to insert all those lines into CPT as this would just destroy the basics. Even if know in advance which opening my opponent will play, it is still not easy to study all the analysis of that one opening. I don't have a bad memory which I proofed in part 1 but I will have to accept that I will forget even more often if I continue with making new analysis. Still this is not a good reason for me to stop making them as it is still a lot of fun just discovering beautiful treasurers which you can only do by analyzing.