One way or another we chessplayers study openings and build up a repertoire. The complexity and amount of knowledge we know, grows exponentially with the playing-strength. Especially strong/ ambitious/ professional players have to know vast amounts of theory. Besides it is not necessarily learning the moves by heart which is difficult but rather remembering everything so it can be reproduced at the board when it pops up in a game. Not rarely this fails sometimes see harakiri.

With this introduction I want to show that it is important to create a good method of studying chess. In fact this is nothing new what I write here as at school our teachers told us exactly the same. However it is too easy to refer to the classical methods of studying. To learn long strings of moves and implement this knowledge in practice is something very different of studying for school and do exams.

Despite I don't remember anything similar happened in my games, I won't claim that I have found the ideal method for studying chess. No, definitely at the long term I experience also problems to remember stuff. In best case I can reconstruct the analysis by spending a lot of reflection-time. I've published several examples on this blog in which I failed in doing even that.

So when I saw 6 months ago in a youth-tournament Tom Piceu, IM of Bruges to use the for me unknown tool chesspositiontrainer, I got curious. Tom explained me that he with some friends decided a couple of years ago to motivate each other and work harder at chess. Studying openings and repeating the openings regularly would be an important element of this. So they bought together chesspositiontrainer (you can buy 1 license for 3 computers). Tom was very satisfied about the program but had to admit that he was not always very disciplined in following up rigorously the schedules.

I was skeptical about the added value of the program for myself. However as I thought it could be an interesting topic for this blog, I gave it a shot. Besides if you try something out then better to do it from the first time properly so not just using the stripped version but testing out the paying one with all features enabled. 40 euro is for a working person not insurmountable (especially in comparison of the prices applied by Chessbase).

A couple of months ago I downloaded the program. I paid for the license and managed easily to get access to all the features after getting my license-key. Next I wanted to test out the program. A small default repertoire is available but I quickly realized that this is not what a user is searching. You want foremost to train your own repertoire and then I imagine many users are getting disappointed. You have to insert all the stuff yourself.

I guess many drop out already. Even if we ignore that most players don't have a polished repertoire then you still need to get all the moves into the program. I read a comment at Quality Chess that somebody spent 40 hours at converting an opening-book into pgn. We know studying chess is hard but this kind of gigantic job is not realistic for most of us. Now we have to look at alternatives even if this means a decrease of quality. Today you have a few publishers, daring to offer DVDs of openings. I say "dare" as it is big risk that the content is illegally copied. It is very easy to spread files (although some of my students are not capable / they can play chess but have very little knowledge about how to use chess-software). You can buy Chessbase magazine DVDs (every 2 months, yearly for the price of 100 euro with a 40 euro voucher) and Move by move DVDs (20 euro each) of which you can select openings so a repertoire can be built. It is clear that you need a large collection of dvds to get a reasonable solid repertoire. It is not cheap this alternative.

Fortunately I could bypass this thanks to 20 years of playing competitive chess with a fixed repertoire see the scientific approach combined with a good archive see archiving. So I had already collected a good amount of material which I could insert simply via pgn into the chesspositiontrainer. I started with my openingbook-file which contains all my recent game-preparations for both colors. I was curious how many positions this would give.


This are already more than 3500 positions while I only injected my most superficial  analysis to study openings mostly in a broadly sense. This is a lot to maintain regularly so I have to be careful not to inject much more moves. Let us therefore have a look how many positions would count my database of my own played games which are commented often deeply. You can check this by creating an opening book e.g. "Brabo positions". 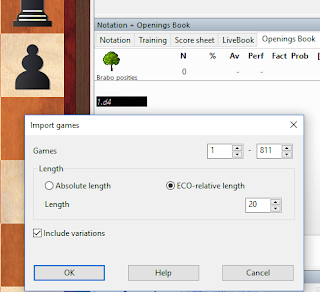 In above screenshot you see that I first select all 811 games of my personal database. Next I choose ECO 20 (default-input which tells us that averagely 20 moves are taken into account of each game linked to the popularity of the opening) and finally I enable the option of adding lines created by the analysis. I press the button "ok" and see the results in a couple of seconds. 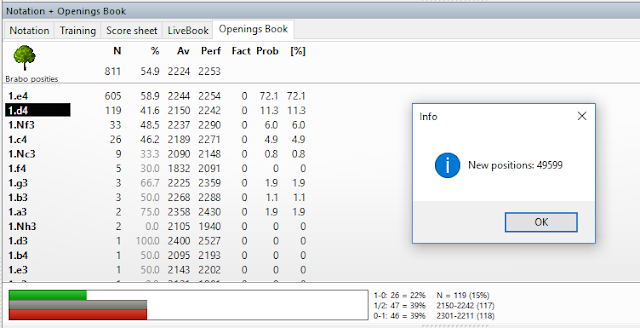 OMG, we have almost 50.000 positions. On reddit I read that a specific user trains averagely 36 postions each day but that would mean that I need 1400 days just to train everything once. That is close to 4 years. On top the program tells us that we need to repeat this regularly. Default is set once per 4 days. It doesn't make sense anymore to look at my 3rd database with specialized analysis of openings.

In the end I decided to restrict the content for chesspositiontrainer to the initial 3500 positions. However that is not the end of the tale as now all the openings are in 1 big file. If you want to work efficiently then you still need to split this into modules. Again there is no support for this from the program. I spent approximately 5 hours to create some soft of structure with modules defined by opening and size.

Finally I can train a piece of my repertoire. I was not able to persevere very long. Except that it is extremely boring, I also wondered why am I doing this. I will not play any standard game in the next 2 months and even on the long term I see only a very small return of the invested time. If I would play regularly against strong opposition then maybe yes but today I don't need this. Besides I also find it rather cumbersome how I have to add new analysis made by a Chessbase-program. There is no automatic connection to the Chesspositiontrainer.

This program already exists since 2004. It is probably the best on the market but the many prerequisites makes it only useful for a very small group of players. I am thinking mainly at professional or and ambitious strong players. I will just use now as an extra tool for my game-preparations to train quickly some specific lines.