I bought during the first years of my chess-career from each (big) opening in my repertoire a book. The Spanish, the French, the Caro-Kann, the Aljechin, the Pirc and the Dutch (stonewall) were the openings. It costed me about 3000 Belgian francs (approximately 75$) as the euro was not existing yet at that time. For a student with almost no money, we talk about the beginning of the 90's, this was a serious investment.

Later I never wanted to buy any new opening-books. The rise of the engines and databases allowed me to create my own opening-analysis. Besides if I would like to keep my repertoire up to date by buying always the newest opening-books then this hobby would become very expensive. Also I noticed that many books are repeating a lot of what has been written before so you get less and less new interesting information. Finally I experienced a lack of motivation to study all the theory from opening-books. Very often an opening-book was only used as a reference work so it was never studied properly.

Only beginning of last year I made an exception. After more than 20 years I bought another opening-book: The Leningrad Dutch. I had decided to add this opening to my repertoire (see why previous article) but I realized immediately this can't be done quickly without external help. The Leningrad has a labyrinth of different variations. It is completely impractical to check 10.000 games in the databases to build an overview of the opening. So it is necessary to ask an expert for advice, somebody having played the opening for many years. The easiest and cheapest way to do that is to buy a book which I did. There are a few options but eventually I chose the book written by the Ukrainian grandmaster Vladimir Malaniuk. He was probably the biggest pioneer as he played the opening during more than 3 decades against other grandmasters. I use the word "was" as he died in 2017 (some sources say he was assassinated). 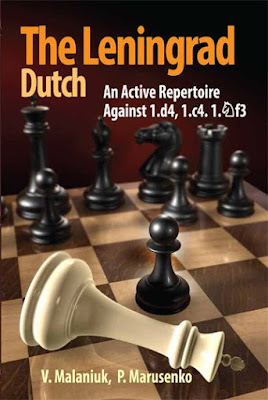 Meanwhile I already read the book twice through. In my 2 recent standard-games with the Leningrad I was able to use immediately some recommendations from the book. However when I investigated the correctness of those ideas later at home then I discovered that the author is often too optimistic for black in his evaluations. I start the review with a first position which I had on the board see again my previous article.
The author tells us that white should try to equalize with accurate play. However after the novelty exf5 followed up with Qc2 my engines show a clear advantage for white.
We have moved 2 moves in the same game. This position is reached in the book via a different sequence of moves than in the game. The author evaluates the position as equal while the engine again shows a clear advantage for white after Nce2. Fortunately my opponent missed that idea in our game.

A fragment of another Leningrad played in one of my standard-games, was already published in the article desperado part 2. Again we see that the author is too optimistic.
White can't equalize and the author continues to prove this with the weaker 14.Rf3. However I already showed by using the engines that 14.Qg4 is still sufficient for equality.

I have bought the book mainly for the Leningrad but I also had a look to what the author tells us about the anti-Dutch systems. I was curious if the author had noticed a quite recent development in the Staunton-gambit.
In the book is written that black's extra pawn compensates the small lack in development. However 14.Nd4 is completely ignored and already known from practice since 2009. White scored already 4 important victories with it in mastergames. The engine is very positive about the move for white.

I wasn't able to check most of the analysis of the book but I fear that I only revealed the top of the iceberg. It again confirms my perception that most books are written for the casual chess-player but don't withstand scrutiny.

Fortunately I didn't have high expectations in advance so I wasn't disappointed. I wanted a skeleton of the Leningrad and that is what the books supplies. The author has built a repertoire for black by showing for each of the important lines of white how he would respond to it. You could say that you have the shell of a house but all the rest still needs to done. This book is sufficient to start playing the opening after you read it but if you want to regularly play the opening then you better do a lot of additional analysis.

Finally I also want to add that I can remember a lot of analysis from the book but I also forget still a lot. I started to read the book for a third time but that will still not be enough to remember all the sidelines. Nevertheless especially in the Leningrad it is very useful to also remember what needs to be done in less frequently played variations. Some suggest to type all the lines from the book to a pgn-file so you can practice with e.g. chess position trainer. This is a Herculean labor which I don't want to do. Only the mainlines is for me the maximum. A recent new initiative is chessable. They do the job of digitizing for you. It is not free but neither much more expensive than a book which you can economize. Unfortunately the site offers today only a limited choice of books. The Leningrad Dutch is not included in their base. I have no experience with Chessable but looking at their increasing numbers of subscriptions, this could become a big player in the future of sharing chess-information.