How much time do you spend at chess? part 2

The last 2,5 years I have supervised several times my son (and) daughter while they play chess-tournaments lasting multiple days. In those tournaments I am very often recognized by other players and then the first question I get is why I am not participating myself. Most parents able to play chess, also participate when the tournament-format allows it but I decided not to do. The reason is that too often I've seen small children looking annoyed after their quickly played games and are hanging around the unfamiliar playing-hall for hours without any supervision as their parent was still busy with its own game. Some of those children were only 8 years old and while most chess-players are nice people, there are also some very strange ones with whom I don't want my kids to have contact alone.

So as I wrote already a few times on this blog, I sacrifice a lot of my free time at sitting and waiting while my kids are playing chess. By reading something and chatting with other parents the time passes by more enjoyable but I also bring along my portable to continue the analysis of my own games. Such activity always attracts curious players. I also assume it creates some suspicion as with the current state of available electronic gadgets, you never know if it is not an effort to cheat. A couple of times an arbiter checked my portable to make sure I wasn't analyzing any running game.

When I am still analyzing on the second day the same game, the first dumbfounded questions arise from players. How deep do you analyze your own games? How much time do you spend at analyzing your own games?... However when I am after the 4th day still busy analyzing the same game, every spectator quits looking. Such analysis could be fine for correspondence-chess but that is not the kind of chess which a tournament-player is interested in.

In part 1 of How much time do you spend at chess? I wrote that averagely I spend about 4-5 hours of my personal time at the analysis of 1 of my games. That is an estimated time which doesn't take into account the number of hours processing time which my computers have used. In the same article I mention that my computer probably consumes 5 x more time. If I tell you that I only let my PC run during daytime while I am around then you understand that an analysis can last several days.

How many days exactly and what kind of analysis are made, seems interesting to once investigate. I knew that recently I mainly work at openings but there are big differences between the different games. We need metrics to get a proper view about it. Checking with a stopwatch the time used for each analysis made during multiple months is not a realistic approach but fortunately there exists an alternative called "Autosave.cbh" which generates acceptable results.

I assume most players never heard about this alternative before. What is "Autosave" and how would that ever replace a stopwatch? Some loyal and attentive readers of the blog should remember that I once used this word in the article the game preparation part 2. In that article I talked about databases which were part of the cockpit I use to analyze and one of those databases is "Autosave.cbh". I didn't elaborate about it at that time as it wasn't relevant for the article. Besides the name "Autosave.cbh" explains partly itself. The file saves something automatically.

Just like excel, word, ... also Chessbase takes care that regularly your work is saved to avoid losing everything when the system crashes. Such file is automatically created at the installation and you normally can find it in the directory Chessbase\MyWork see the screenshot here below. 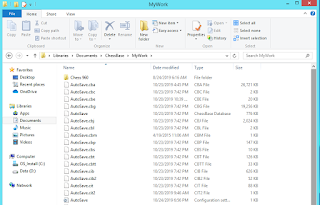 So if your system crashes then often you can still find back your notation + analysis in the file "Autosave.cbh" and bring it back to your favorite-folder. Beside "Autosave.cbh" doesn't save only the most recent version but also earlier versions of your work. This allows you to restore something you erased and which you regret. Or as for this article I was able thanks to "Autosave.cbh" to check how many versions of the opening, middlegame or endgame were saved. 200 versions of just one game in "Autosave.cbh" were no exception for me. A glimpse about this excessive saving, you can see in below screenshot. 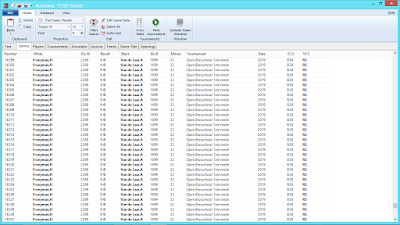 Timestamps I couldn't find of the versions but I believe it is fine to assume that each version covers approximately the same time-span. This was also shown when I compared 2 tournaments and divided the number of days used for analysis and the number of versions stored. The deviation was 11% so more than sufficient to make conclusions. The 2 tournaments which I used for the exercise were Open Gent and Open Brasschaat which I played last summer. The analysis of the games of Open Gent were finished the 28th of August which means it took me 27 days (I didn't work at it during the Open Brasschaat). The analysis of my games played in Open Brasschaat were finalized the 17th of October and that corresponds with 47 days of analysis (I didn't work at it when I had to play new standard games for interclub and clubchampionship). Eventually I was able to make a pretty detailed analysis of the number of days I spent at analyzing my 18 games.

Averagely it takes a bit more than 4 days of analysis per game but there are big variances between the games. I spent less than 1 day at my 4th round of Open Gent while the first round of Open Brasschaat took me more than 11 days.

Contrary to expectations, I notice nor the elo of the opponent nor the result of the game influence really the number of days. The time of the analysis is mostly related to the type of opening played. 80% of the time is spent at that phase which isn't such a surprise as I use a scientific approach to chess. You can't play successfully always the same opening without an in-depth study of it.

Openings which I never studied before, take a lot of my time to analyze properly. Nevertheless it doesn't mean that I neglect the other phases of the game. It seems that spending only 5% of the analysis at endgames is inadequate but how many players can claim they spend more than 4 days in the last 2,5 months exclusively at analyzing endgames seriously.

Yes I think this article once again shows that I am not the average player. Most players just play chess and spend only a couple of minutes to check any mistakes. Besides I do this kind of analysis already for more than 20 years. Over the years I have refined my working-methods and put much more emphasis at the opening.

Several international masters told me that they don't analyze their games so extensively as I do. Anyway I don't expect my students to do such analysis. You should only do that if you enjoy it. In a next article I want to discuss how useful this is for your own development. Is it more than just fun?