"Best by test", said former-worldchampion Fischer about 1.e4. He got the best results with 1.e4 so he kept playing the same lines which brought him fortune earlier. Chess is about results so logically we like playing openings which have won us games before.

On the other hand some amateurs ditch an opening from the moment they have lost a game with it. They change openings at the same rate as they change their underpants. They play any opening but know nothing. They don't want to make any effort to find a solution for a problem in the opening or worse they think wrongly that the defeat is because of the chosen opening.

In the book Ivan's Chess Journey Unravelled the strong Dutch grandmaster Ivan Sokolov gives therefore the advise to test at least an opening a couple of times before taking the decision to give it up. Next to that he also made the interesting comment that he sometimes removes openings from his repertoire although they are theoretically sound. If the resulting positions don't fit your style and results remain under par then obviously you can't keep on playing them as a professional.

So statistics influence our choices in chess but in comparison with computerchess this is child's play. In computerchess statistics have always been used very intensively to make progress. Each new minor-upgrade of an engine is tested extensively not only to remove any bugs but especially to define any change of the playing-strength. Besides in the course of the history of computerchess we see an increasing use of techniques embracing statistics.

Speed had always been the key. The faster we can evaluate, the faster we can make new changes. The first logical step was to make automatic testsessions to avoid the slowness of the human operators. In the last decade as hardware kept gaining speed, it became also more and more interesting to choose for rather short and more than slow and long (games). This change of analysis I already explained in 2015 here see computers achieve autonomy and nowadays I use it myself regularly.

In the last 2 years programmers even started to work with only bullet-games or faster. The path was cleared for the neural networks which more than ever need huge amounts of games to learn. This way AlphaZero played against itself 44 million games and learned to play the best ever chess performed in history in just a couple of hours. It was only given the rules of chess and the rest was figured out by the engine. At least that is what we were told everywhere as you could read e.g. at chessbase. The real story behind was much more difficult to discover. To learn more about it I decided to buy the very hyped book Game Changer. 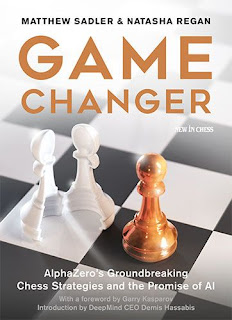 I am halfway with the book but meanwhile I do realize the book wasn't meant to explain the code of Alphazero. The authors are in the first place players so not surprisingly they concentrate on the chess-content of the games. It is still a nice book to read but to learn about the technical aspects of the engine, you better study the scientific document of Google/Deepmind.

That file explains that the engine works with a probability-distribution of 4672 possible moves. Knowing the starting position only contains 20 possible moves then this is clearly something very complex which not everybody can create. Even the experienced Leela-developers which used the input from Alpha Zero had still many questions. Maybe this was also the purpose of Deepmind. They try to give a new method to the world for creating a superstrong engine but leave things open so developers are forced to use their imagination.

Besides such very sophisticated learning-process is totally useless for a chessplayer. Playing 44 million games in a couple of hours is no option. The only statistics based on games played by humans with some value, are openingbooks extracted from a database (see my article green moves). Still even then the value is rather limited which I experienced first hand recently. Last season I played a game in which I played after the moves 1.e4 e5 with black 19 consecutive moves considered to be the most popular one at master-level. The Chigorin-variation of the Spanish remains today the undisputed number 1. 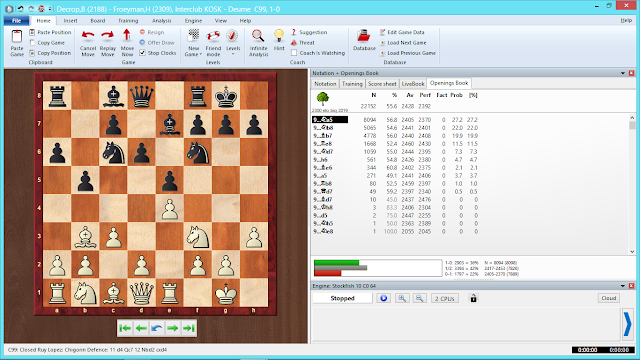 Only at move 21 I deviate from the 4 last master-games in the big-database 2019. It already had little statistical value but more remarkable is that black was landed in an unpleasant position. This combined with a well prepared and excellently playing opponent made a deadly combination. 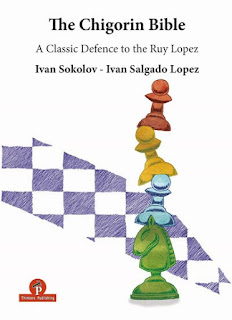 As the authors notice in the book, it is weird no similar book was ever written before about this opening despite it is the most popular line of the Spanish. In the meantime I finished the book and I can definitely recommend it for anybody interested in this opening. We get a very good and extensive overview of the opening and it seems the opening is still fully playable. Also many improvements are given upon old evaluations. At chesspub the critic was given that it is incomplete. It is not totally unjustified as also 20.d5 isn't treated in the book. Still we shouldn't be too harsh either. With Na5 you can find more than 8000 mastergames in the big database 2019 and we still need to add the correspondence-games. In the book there are numerous alternatives given so you can get with ease around any missing lines with both colors.