What could've happened if I would've not made the wrong choices in my chess-development? I don't think it is an interesting question for the popular humorous sketch-program "what if" but it is definitely useful to reflect about the committed errors. No I can't reset myself today but I can learn from my mistakes so my students avoid them.

Therefore I strongly advise my students against playing the Dutch. Don't do it as I only encounter misery with the opening. Next I recommend my students to play as much as possible standard games. I don't play often enough but I do realize it is crucial for the development. It is more important than analyzing at home with an engine or reading chess-books. Finally don't make my error of stubbornly playing always the same openings. The element of surprise is very powerful in human chess. It is just nonsense in practice to use a scientific approach. My students want to score points and are not interested to develop the theory of openings.

Except some general advise, my students also need very often concrete tips. It is not so easy to vary successfully the openings especially for young players. Playing a new opening without knowing any theory of it, is very risky. We can't expect that young players already read opening-books or watch opening-dvds. If we force them then this could even be counter-productive. Also the information is often not adapted to their level or age. So this is a domain for which the coach should help. Unfortunately this is not so simple as this needs to be done tailor made. I didn't have the time and will to work out something for all my students. So it is not surprisingly that I only run this extra mile for my son Hugo.

In my previous article I wrote that I had decided after the Flemish youth-championship to teach my son Hugo a couple of new openings to be prepared for the upcoming Belgian youth-championship. So I started some brainstorming. I prefer no openings which I play myself. They are not suited for the level of Hugo and this would allow the coaches of the opponents to also study my games for the preparation. Neither did I want to select theoretically heavy openings. It is a nightmare for a 1600 rated player to be forced to study hundreds of moves.Also I didn't want any openings in which 1 mistake would mean immediately defeat. Finally I didn't want him to play any dubious openings. No known path to a clear advantage should exist for the opponent even if this is very hard to discover on the board.

A couple of weeks later I had made the selection. Next I made a short summary of the most important lines which I considered useful for Hugo. Finally all was ready for Hugo to study the prepared materials but that didn't go smoothly. I didn't want Hugo testing the new openings in the tournaments before the Belgian youth-championship as I wanted to maximize the element of surprise. Playing online with a nickname was my first choice but this only resulted in a very slow progress. That way it would take months before the basics would be known. I was getting desperate but then I suddenly remembered about having bought 2 years ago chess position trainer.

It figured out that it was very easy to add repertoires of other people without causing any interferences. You just click "add new repertoire" and give it the name of the new user. Next you add new folders and moves for the new user as I did for myself 2 years ago. Beside it is also possible to copy openings from 1 user to another if needed. In 1 hour everything was prepared so Hugo could start to practice. 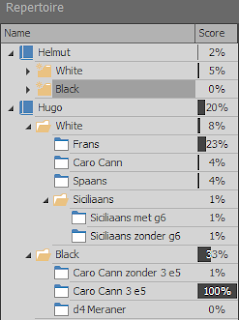 As you can see above, there aren't many openings. I only inserted the openings which I considered annoying to meet for Hugo without any knowledge and have a reasonable chance to appear in his games. I limited the content for his level.

In my previous article about the chess position trainer I was rather negative as I couldn't get much from it. However for my son Hugo it became a fantastic revelation. The combination of learning quickly and efficiently the lines plus the funny mix of stimulating sounds/ music, worked like a magnet on Hugo. The first time he needed a half hour to have all the moves right once. Just before the games started on the championship he was able to execute all the moves perfectly within 1 minute. It was so fast that I even became anxious. Maybe he will play too fast during his game and make a slip.

To get a maximum return of the new openings we had decided to play them only for the important matches. This happened in the last 2 rounds of the championship. His opponents were not only surprised totally but again it was proven that preparations for young players are often counter-productive. Both opponents answered the new openings of Hugo as Hugo was still playing the old ones. Young players are very vulnerable for the einstellung effect. The game of the 9th round is the best example of it.

[Event "BJK CBJ 2019 U12 B"] [Site "Blankenberge, Belgium"] [Date "2019.??.??"] [Round "?"] [White "Hugo"] [Black "Oloeriu, Calin"] [Result "*"] [WhiteElo "1603"] [BlackElo "1389"] [PlyCount "11"] [CurrentPosition "rnbqkbnr/pppppppp/8/8/8/8/PPPPPPPP/RNBQKBNR w KQkq - 0 1"] 1. e4 e5 2. Nf3 Nc6 3. Nc3 {(A surprise as in all previous games Hugo played Bb5.)} 3... Nf6 4. Bb5 a6 {(Of course Calin was prepared for the Spanish opening of Hugo. However this is not the Spanish opening. It is the Spanish variation of the four knights opening. A6 doesn't fit here although it has been tested in practice.)} 5. Bxc6 dxc6 6. O-O {(After the won game Hugo proudly came to inform me. However I wasn't congratulating him at first. I was disappointed that he hadn't followed my advise. I had warned Hugo that he likely would get a present from his opponent in the opening but for that he should not play any automatic moves. So it was very painful for me to see him missing Nxe5 after just spending a couple of seconds.)} (6. Nxe5 {(After the game I asked Hugo if he considered this capture. "Yes", he answered, "but I didn't play it because of Qd4". Indeed Hugo was also still playing in the mindset of the Spanish opening instead of the Spanish variation of the four knights opening.)} 6... Qd4? (6... Nxe4 {(This is the critical move and it is not so easy to keep an advantage for white.)} 7. Nxe4 Qd4 8. O-O Qxe5 9. d4 {(Only by active and accurate play white keeps an edge.)}) 7. Nf3 +- {(The knight on c3 makes a huge difference here. )}) *
As a coach you are always choosing the middle ground between the danger of overwhelming the student with lines and the danger of teaching him too few lines. After 4.Bb5 we prepared against Bb4, Nd4, Bc5 and d6. The rarely played a6 was not one of the candidates. Maybe I should've known in advance by considering the young age of the opponent. Anyway hindsight it is always easy to state what should've happened.

Yes, I do admit that the impact of the openings was limited on the final results. Hugo achieved a very strong shared 2nd place (don't forget he was playing this time in a category 2 years older than his own age) but the points were never decided in the opening. Nonetheless it was not a waste of time to practice the openings on chess position trainer. I could clearly see that it improved enormously his self-confidence. It was that evident that my daughter Evelien became jealous. Why does always her brother get all the support for his games while she is left alone?

Evelien only started last year to play chess so it made little sense to study any openings at all. Besides her opponents are much weaker so often there was no information about them available. Only for the last round of the championship I made an extra effort. I looked at an earlier played game in the same championship of her opponent Jade Decraene and prepared a pgn-file with some recommendations which Evelien happily practiced with the Chess position trainer. 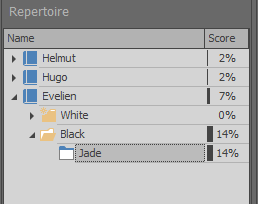 I mention this anecdote to show we can also work per opponent instead of per opening in chess position trainer. In my article curieuzeneuzemosterdpot I wrote that I started to maintain a player-database of preparations I've made per player per color. Well it is very easy to insert those analysis in the chess position trainer. There are some big benefits of this approach. You don't need to jump anymore from 1 folder to another one. Also you only have to look at the lines which are relevant for that particular opponent.

How did it end for Evelien? Evelien got a great position thanks to the game-preparation but she missed the experience to convert the advantage into a full point. She was disappointed but you can't expect to defeat a girl already competing for 4 years while you yourself  have less than 1 year experience. Her final result of 5/9 promises a nice future if she keeps playing chess of course.