How many games should I play?

Many chess-clubs offer lessons for the youth but adults are often ignored. Contrary any adult able to play chess is begged to give courses even it is just explaining the basic principles of step 1 and 2 at children. Now and then I hear another teacher at KMSK telling me that I am instructing things to my children which they haven't learned yet themselves.

It is very rare that I hear an adult trying to start playing chess. Sometimes a parent having a child playing chess, wants to know more about the hobby of his child and tries to get involved into chess but also very rapidly quits. It is emotionally tough to see how even young children are progressing much faster and easier than yourself. A degree at the university of laws, engineer, doctor... doesn't give any added value to play better chess.

Adults making big improvements is something very exceptional. So I was very surprised to hear last year that an American claimed to have developed a training-method to improve from beginner to international master as an adult. Not only that but he said that he did it himself in 3 years to get that renowned title. Too good to be true I thought so I liked to see for myself what he wrote in his new book Applying Logic in Chess. What am I doing wrong or what can I do better? I assume many players are regularly wondering this. 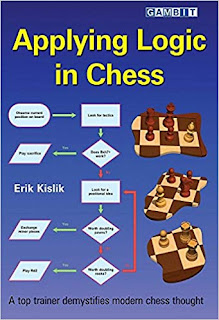 If we look at the fide-rating-profile of the American IM Erik Kislik then we see he got his first rating beginning of 2008 and already in 2012 achieved the IM-title. So 3 years is a bit exaggerated even if we take into account the slowness of fide attributing the titles. On the other hand it is still an incredible performance for an adult.

However having quite some experience with salestalk and particularly with Americans I know you should always look deeper than just the surface. After some research on the internet I quickly detected that Erik already had in the year 2002 a 1900 USCF rating. 1900 USCF corresponds with about 1800 fide. More than half of the clubplayers never get such high rating so stating that in 2008 you are still a beginner is a very open interpretation of the term "beginner". Gaining a couple of 100 rating points in 3 years is something much more realistic to achieve.

Each of the books are showing the many obstacles on the road to the title and give the readers advise what to do and not to do. If you compare the books then you find resemblances but also big differences. I was surprised about that as I expected not so different roads for improvement exist as we know so very few success-stories. I think this is something interesting to investigate a bit deeper by comparing the books "Applying Logic in Chess" en "Pump up your training" as they suit best for this task. Below you can find my short summary of the comparison together with some comments from myself. 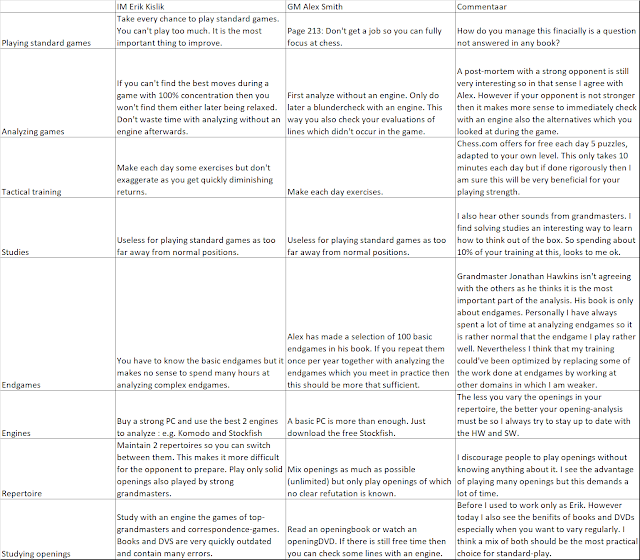 You can see many serious differences in the approach of both. Personally I am feeling more affinity with the method of Erik Kislik but there is certainly also good advise in the book from Alex Smith so I recommend them both. Alex often gives more concrete advise while Erik will tell which parts of the training should get the most time. I think a mix of both taking into account your own preferences and situation is likely the most optimal choice. Surely a coach can help you with that.

Finally in both books there is clearly one common advise which is to play as much games as possible. With games they mean of course standard ones so no blitz. In each training-plan this should get absolute priority. To know how many games we are talking about, I checked the activity of the authors on their path to the titles. I start with the American IM Erik Kislik.

At the age of 22 he got the FM-title. At 25 he became IM. Averagely he played 140 games each year for standard fide rating and that for a period of 5 years. So in 1 year he played (much) more than what I played in the last 10 year together!


Eventually we only see a gain of 150 elo compared to his initial rating. The Swedish GM Alex Smith did much more. However it took him 10 years to climb about 350 elo as an adult.

We see Alex only making serious progress when he starts to play more games in 2007. In 2008 he became IM and only in 2016 he got the GM-title. In those years he played averagely 110 games per year with an insane peak of 185 games for standard fide rating in 2008.

Finally the British GM Jonathan Hawkins shows that improvements don't come solely from playing a lot of games. Maybe he played many games without being rated but I doubt that as strong players don't get much chances this way to get interesting opponents.

FM he became at the age 25. At 27 he got the IM-title but only at 31 he finally became GM. So we see more than 300 elo gain over a period of 8 years. Only for the jump from IM to GM he played considerably more games but still less than the 2 other earlier mentioned players.

So I think we can conclude that playing many games is necessary to make progress. However as an adult it is very difficult to free enough time for playing those games. If you are not rich then this can only be done by combining lousy paid temporary jobs and you must be satisfied with minimum comfort. It is no wonder that over the age of 30 it is becoming increasingly difficult to maintain such way of life. You can't combine this with starting a family.

For me there won't be any big improvements anymore and I should not wait for my retirement like strong Jan. Jan was able to stop working at the age of 60 but likely I will have to continue till 70 which makes a big difference for a chessplayer.

Last year I started to play rapid-tournaments together with my children see my article memory. This year I am planning to play together once a standard-tournament. It is a small step to become again a more active player.