In the last decade many free chess-software appeared online but Chessbase remains head and shoulders above. Chessbase is more than just 1 program as the company has produced hundreds of chess-products. Obviously some players get lost in the jungle of choices.

Very often we see people purchasing stuff they don't need. Most salespeople will recommend their most expensive products and often inexperienced players trust them as they believe that it is safer to pay more. After the purchase very quickly they feel fooled and disappointed. At home they discover it is not possible to play games against the program. The engine is not one of the best ones in the world. 95% of the features are never used. After a couple of years the most recent and interesting games are lacking in the database. It is not surprising that those people never buy anything again from Chessbase and use the outdated program only sporadically anymore.

I very often discovered that doom-scenario during the presentations I gave last year about chess-software see e.g. the game preparation part 2. Almost everybody had some old version of Chessbase running on their portable with an obsolete database and an engine often hundreds of points weaker than the current champions. Eventually my presentation missed largely its purpose. I wanted to teach them how to prepare and analyze optimally by using the most up to date technology but that is impossible if you don't own the right software.

I did help my students in Mechelen as I had time in the months after the presentation to support their personal journey of updating their programs. I showed them where they could download interesting software for free legally or let them copy some databases which I created myself. Only when there was no alternative I demanded from my students to buy some software while always looking for the cheapest choice. In the end they were all having the best tools without having to buy the rather expensive Chessbase. A student has often very little money so I think it is logically to weigh the investment to its return.

Besides end of 2018 a new edition of Chessbase became available: Chessbase 15 with many new features. Therefore I think it is useful to see for whom this new edition can be interesting. It is a simple question but only after a lot of research and comparing it was possible to make a recommendation. As I don't possess Chessbase 15 and the manual doesn't say everything, I asked support from HK5000. He bought the program and already wrote some articles for this blog.

First we started making a choice of 2 reasonable attractive purchase-packages financially and functionally. However at the same time they should be sufficiently different so it would be possible to reveal each of its strong and weak points. It wasn't easy as we both looked differently to Chessbase. However each disadvantage is also an advantage as our differences brought a more balanced view of the software.


Buying in 2019 of Chessbase 15 Starter Package (Big Database 2019 included for free), in 2020 of 1 year Online-Update Reference Database, in 2021 of 1 year Online-Update Reference Database. HK5000 makes an important remark about the updates. They are only interesting for people playing a lot of games (at least 50 standard games per year) and have a +2200 rating. So many users of Chessbase can avoid the costs of the updates. Budget for 3 years with the updates = 319,7 euro. Budget for 3 years without the updates = 199,9 euro.
Option 2: Amateur-package


Buying in 2019 of Houdini 6 (Fritz 15 GUI included for free) and Big Database 2019. I preferred Houdini instead of Komodo as it is 10 euros cheaper and developed by my compatriot. It is as strong as Komodo. Fritz is offered with the newer version 16 GUI and 10 euros cheaper but still I consider it less interesting. The new features of the GUI are for me not important and the engine Fritz plays 200 points weaker than Houdini. Budget for 3 years = 149,8 euro.
Next I and HK5000 made a summary of the weak and strong points we discovered in both packages. Each feature was commented and evaluated. Score 5 = I like it very much and use it often, 1 = useless, 0 = absent. The final version after many iterations can be found in the 5 tables below (click on them to read the details easier). 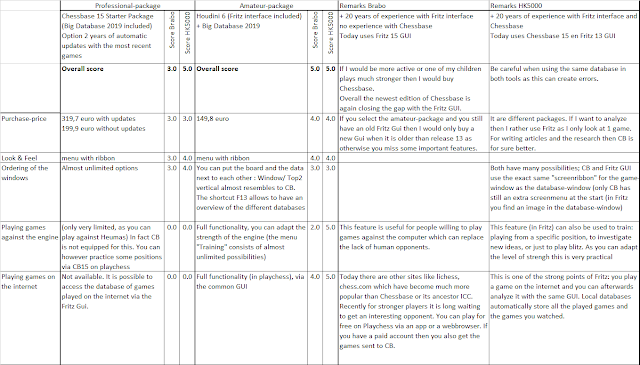 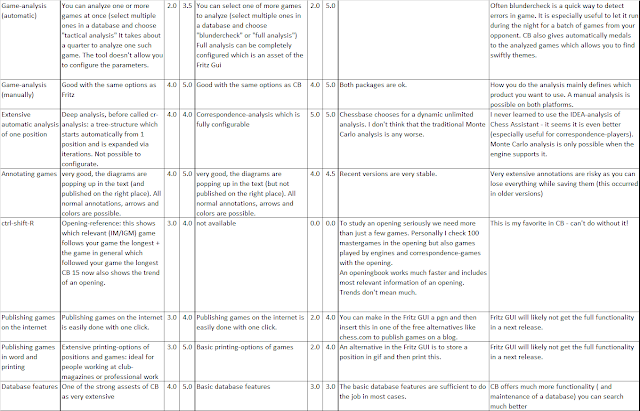 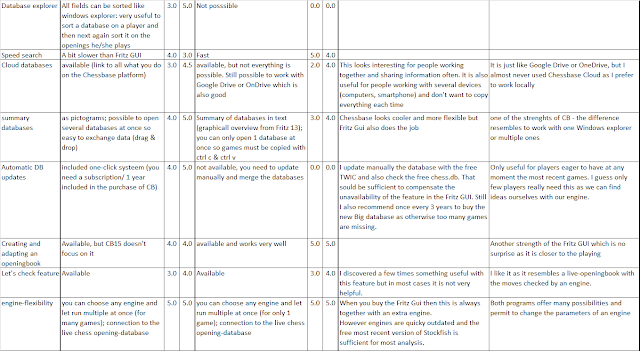 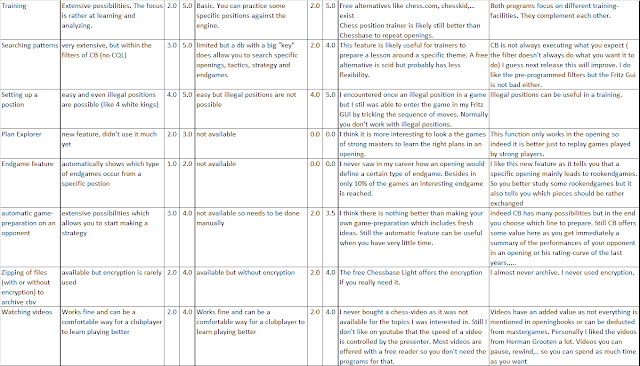 From the personal scores of us both to the features of the 2 packages some conclusions can already be made.
1) We are giving to both packages a total score of 100 points and more. So each package offers us both a lot of interesting features.
2) In about 1/3 we give identical evaluations. So we are clearly different type of software-users which doesn't mean that we disagree about the value of the functionality.
3) It is also interesting to define how much extra points are gained by buying the professional package on top of the amateur-package. For me it are 20 extra points. For HK5000 it are 27 extra points. If I wouldn't possess the amateur-package today then I would definitely consider to buy the professional-package.

Above information summarizes very well the qualities of both packages which to some extend will permit to make a personal judgment and make the right purchase. Nevertheless I still think it is useful to make a general recommendation especially for people not having any experience with any chess-software. It is hard to visualize some features without ever having worked with it.

Personally I recommend the amateur-package for each player starting/ learning to work with premium chess-software. I believe it is useful first to work with the more simple Fritz Gui. Besides most beginners are mostly interested in the playing aspect and don't possess yet many databases.

The professional-package is very interesting for a small group of players.
- Trainers and students exchanging intensively study-material (I assume in Belgium only a few players match this description)
- Young players with the ambition of becoming FM/IM/GM (These are +2200 players younger than 30 years so maximally 30 players in Belgium.)
- Writers of club-magazines, books or webmasters (I expect only a few dozens in Belgium)
- Finally players with 1 or more years of experience with the amateur-package and who value the extra functionality of he professional package which can be used in the daily work at home. (It is hard to say how many people but I know very few players willing to work each week at least 1 hour with chess-software)

So if 50% of the club-players are interested to start with the amateur-package then likely not more than 5% will benefit from the professional package. I also have to add that Chessbase (the firm, not the product) inserts more and more features from the Fritz Gui into each new release of Chessbase (this time the product so not the brand). It becomes less and less interesting to still choose the gui. Of course they also know that most people won't buy both packages and commercially it is more interesting to convince people to buy the most expensive product.