About 7 years ago I started reading the 12 part-series of Garry Kasparov see the Neo Scheveningen. I finished all 5 books of his predecessors. The first book about Modern Chess Revolution in the 70s I didn't purchase as it is not much relevant for a fidemaster today. On the other hand the 3 books about his world-championship-matches against Karpov were very interesting. Finally Kasparov also wrote 3 books about his own career so beside his games played in the matches against Karpov. Of those books only the last one intrigued me although Hypekiller gave a rather negative review on this blog about it.

So I conclude my journey at 9 out of 12. The last book on Kasparov was definitely the least as Hypekiller warned us in advance but I don't regret the purchase. I was mainly interested in finding out what Kasparov tells us about the current openings and that aspect is well covered. Despite he already ended his career in 2005, many of his opening-analysis stay even today valid. He was always a pioneer in the openings. Many of his analysis confirm what I meanwhile discovered myself or even extended my knowledge of certain variations with new interesting ideas.

I am not going to summarize all those analysis here as that would be impossible in one article and also would likely violate copyright. However I do want to make 1 exception for a special position. I earlier wrote about twin-positions in my articles an extra move part 1 and an extra move part 2. Well thanks to this last book I found a triplet of positions with 0, 1 or 2 extra moves arising from the opening. First I couldn't believe it but after some research in the databases I got confirmed that each of those 3 positions are occurring in multiple games played at master-level. Therefore I think it is very interesting to figure out how the result is influenced by the extra move in practice. I start with the position without the extra moves which I even once got on the board in a standard game (see the earlier mentioned article of the Neo-Scheveningen). 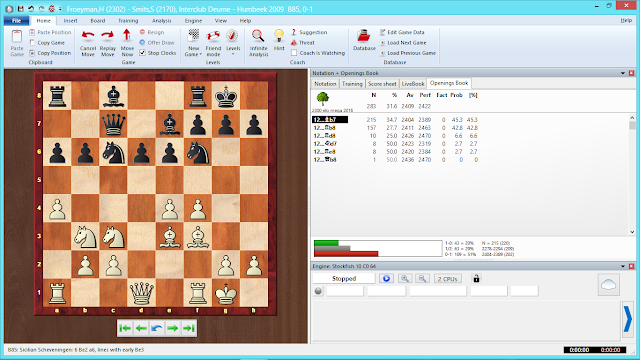 The same position but white to move pops up less in practice but has been played successfully by Garry Kasparov. 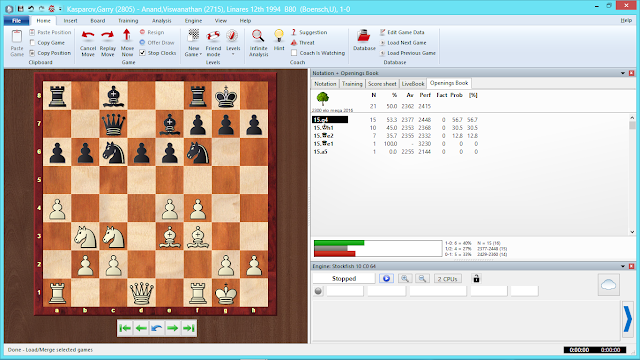 Finally above position also exists with the extra move g4 so white still having the move. The most important game with that position is probably between the strong Russian grandmaster Evgeny Alekseev and the strong Armenian grandmaster Sergei Movsesian. 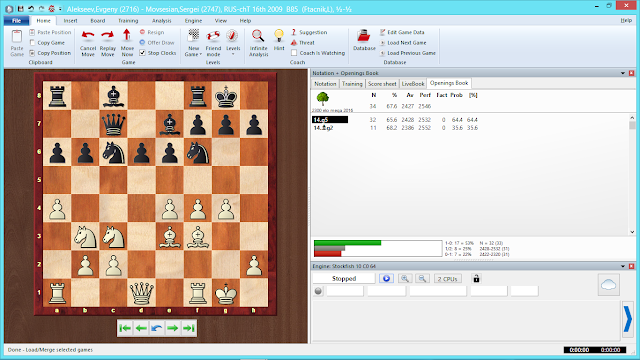 First thing what I notice from above statistics is that the more extra moves, the higher the average rating of white. I earlier wrote how little openings influence the result of a game (see to study openings). Later a reaction of a Belgian IM countered that statement as things go differently for masters. Well above statistics do indeed hint that stronger players put a lot of attention to the opening.

In the past there were many handicap-matches in which one color get 1 or multiple extra moves. I think it is therefore interesting to define a formula in which we link a tempo to a certain rating-gain. If we ignore tactical positions then it appears that the advantage of an extra move is rather limited. In above example we see that the first extra move generated an improvement of about 65 elo at the (relative) TPR. For 2 extra moves it increases to 131 points. From those 2 figures we can deduct that handicap-games based on extra moves between humans and top-engines are rather useless. It takes at least 6 extra moves to bridge a gap of 400 ratingpoints. How many interesting positions exist with so many extra moves? Only games with a material-handicap are competitive between humans and engines and even in that domain there are big limitations see comebacks part 3.