Our sport needs advertising to grow or just even to survive but rarely its biggest asset is used. Chess can be played a whole life. It keeps intriguing and enjoying us. I am addicted to the game for more than 25 years and still every day I discover new things. Chess is an endless source of exciting stories on and off the board. Countless examples are shown on this blog.

An important role in all this are the absence of strict age-categories. Any physical sport must take into account the age of the person but a game of chess can be played between a very young player and a very old experienced player. Chess acts as a bridge builder between generations. It not only is a lot of joy but it is also a very easy topic of discussion.

Besides very young can be considered literally. At the age of 3 years children are already capable to learn the rules and adopt them in a game. My son Hugo wasn't yet 4 years old when he was together with his sister Evelien introduced to chess see cheating. On the picture below we see Hugo playing a game at home just before his fourth birthday. 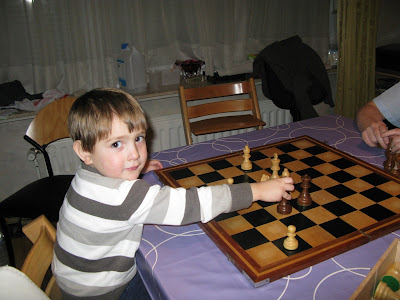 No, I am definitely not a parent pushing my children to play chess. My daughter quickly dropped the game while Hugo slowly learned more and more about chess. Nothing was mandatory so it took 2 years to finish step 1. I believe there is a big difference with the performance of the 3 years old Misha Osipov in a Russian TV show. A genius or just a kid? I am not the only one asking if this is appropriate.


On the other hand support of the parents is absolutely necessary for very young children. Clubs must warn the parents if this isn't happening. I even dare to state that some minimum conditions should be demanded from the parents when they subscribe their child in a chessclub. Too often I see parents dropping their 7/8 years old child in the class without any further commitments. Sorry but this sounds more like an elite day care. Children can/ should play youth-tournaments once they are at step 2. I don't recommend earlier as often the rules aren't well mastered yet and the child risks otherwise to lose a long demotivating string of games. Hugo was already 6,5 years old when he started to join me to the youth-tournaments (see basic).

Beginning of 2017 Hugo achieved step 3 so time to try his luck in standard games. However here I encountered a problem as there is no club in the neighborhood arranging a standard competition in the daytime. No club had experienced issues with players going normally to bed between 8 and 9 PM. I toyed with the idea to contact my old club de Torrewachters in Roeselare. I know they have a very nice championship on Saturdays at 2 PM. But I didn't like the prospect of each week to drive more than 300km for just 1 game. In the end KMSK offered an emergency solution. Hugo could play a couple of games in 1 of their 10 teams of the interclub. 1 day after his 8th birthday Hugo played his first official game. Coincidence or not but there were 75 years difference with his 83 years old team-mate Walter Huyck. 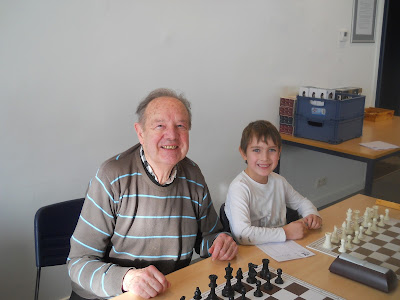 A real danger is children advancing too fast and getting exhausted at some point. I also see adults with unrealistic goals. Fun should always be the most important. Only if we respect that then chess can be something unique of which young and old can enjoy at the same time.