King's gambit with Bc4

Many clubplayers still play today regularly the king's gambit despite the dubious reputation. The exact evaluation of the positions is for those amateurs less important than getting a complex position on the board in which uncompromising chess can be played. Therefore I still don't understand very well which market John Shaw with his monumental book about the King's gambit wants to tap. 680 pages counts the book so clearly no simple literature in which an amateur will peek when having a break. I recently asked Ben of the denksportkampioen how many copies he already sold and if I remember well then it were about 15. That is not much for a quality-book (which it surely is) but it does correspond to the number of players which I esteem not only aspiring uncompromising chess but also are an adept of the King's gambit. 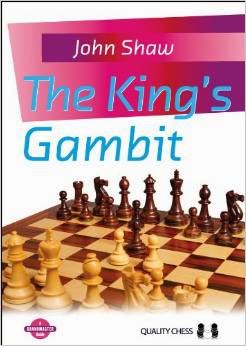 Naturally the book got a lot of attention in reviews on the internet. Most comments were rightly discussing the refutation which the author found against the Bc4 line of the King's gambit. Former-worldchampion Robert James Fischer played this opening with white several times so I was curious what exactly was discovered. Opening-books I still don't buy but thanks to chesspub I was able to get a pretty good idea of where the hot potatoes were. Below a summary of the most important lines.

Rapid-games I haven't played for a decade but as mentioned in my previous article I am annoyed by problems of inactivity so decided to subscribe anyway with the motto "better something than nothing at all". Rapid-games don't fit in my scientific approach and I like blitz more for fun. So I participated mainly as preparation for the Open of Gent. I am by far not the only one looking at rapid-tournaments in this way, see Bart Michiels statement on Schaakfabriek: "My next tournament is the olympiad and I searched a rapid-tournament to become in good shape." I am digressing from the subject so time to return to the King's gambit with Bc4.

In the quarter-finale the opening was encountered a first time thanks to Marcel Van Herck. Marcel already has the King's gambit for decades on his repertoire but I didn't expect any dangerous novelties. This was a bit optimistic as afterwards he surprised me by telling that he knew the content of John Shaw's book. Marcel noticed a few weeks earlier how I suffered in a variation in some blitz-games so he decided to test me with it.