Most chess-tournaments exist by the goodwill of volunteers. This time (a first) nobody was willing to organize the Belgian championship. It has not much sense to search for the culprit as eventually this is a shared responsibility of all the players. Now to anyway appoint a Belgian champion, an agreement was made with the organizers of the Open summer-tournament of Charleroi, see e.g schaakfabriek. Better this than nothing at all of course. B.t.w. I already once played in Charleroi and I can recommend the tournament.

Surprisingly the announcement states that Sofia-rules will be applied. These rules are already in vogue in several foreign tournaments (or in a lighter format for the first x-moves) but to my knowledge this is the first for Belgium. Now I just got informed that the tournament rules are talking about no draw offers under 20 moves or 1 hour of play so this is a very soft version of the sofia rules. Nevertheless I believe it has sense to write an article about this subject. What are the advantages and disadvantages of those rules?

First let me look to the advantages. A game can be stopped at any moment when both players agree. This permits to stop when you consider all life has disappeared from the position. You don't have to search for a repetition of moves or wait till the 50 moves rule becomes active. Next draw-offers can also be an enrichment of the game. An offer can be considered as an extra question to the opponent which will often lead to spending extra time. It can also have a psychological purpose by trying to seduce the opponent for a reckless attack.

Further there are also situations in which the players lost interest in chess so don't want to continue playing anymore. They don't feel in good shape, their thoughts are more with the friends at the bar,... With sofia-rules there is the obligation to continue playing even against their own will which can surely be not a propaganda for chess.

The other side of the medal exists too of course. You get short pointless draws. Neither the sponsors, neither the organizers, neither the potential spectators enjoy those games which can only create negative propaganda for chess. Also early draw-offers can often be disturbing. The line between a psychological offer and a disturbing offer is often unclear. Bert acknowledges that he proposed draws of which he knew in advance that the opponent would refuse. You could wonder if this is still appropriate. On Quality chess blog somebody stated that 1 wrong draw-offer can already be disturbing. Now personally I find this a bit exaggerated as it is only a game. Often players don't even realize that they disturb the opponent. Personally I do try to follow some guidelines when proposing draws. I don't propose a draw if I have a strong suspicion that the opponent will not accept (e.g. if we both know that I have the inferior position). Proposing draws against higher rated players (100 points and more) also have little sense as they only accept when they are worse which makes it a pity to propose. Higher rated players decide for themselves when it is time to stop their winning attempts in an equal position.

Short draws are often in tournaments also a tool to achieve averagely a higher final score. You can rest more often and also you get often a bit easier opponents which is obviously not a sportive advantage compared with players playing each game at 100%. Sofia rules are also sometimes glorified to get more decisive games so lowering the drawing%. Certainly the higher levels can generate very high drawing% in such amount that there is very little separation between the players (see chessbase ) and decisive games are always more appealing for the public.

About the effect of the Sofia-rules exists a lot of discussion so I do think it is interesting to elaborate on this subject. From the megadatabase it is difficult or even impossible to deduct something as nowhere is mentioned if the game was played with or without Sofia-rules. However thanks to my personal games which are well stored and commented, we can draw some careful conclusions. Below is a table in which I show over the years how many serious games (with a slow time-control) were played, how many draws and how many of those draws were prematurely agreed by a mutual consensus (in comparison with Sofia rules). The numbers weren't dressed up so are directly the result from my personal database as I did previously in my article studying openings. 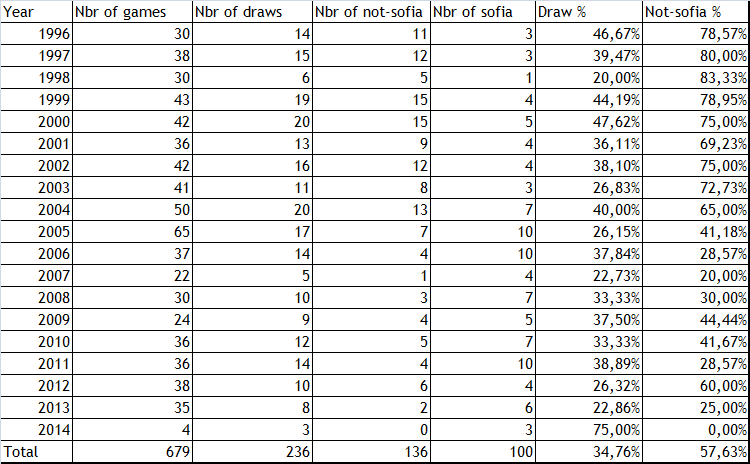 I am clearly not averse from making a (too) quick draw as I earlier wrote on this blog: early draw proposals in the interclub, a short draw in the last round, lars schandorff, ... If we look attentively to the data then we see for the years before 2005 a lot less draws, played conform Sofia rules compared with the years after 2005. The reason is not a strongly changed playing-strength as my rating stayed within an interval of 100 points. Neither do I believe that my way of playing drastically changed as in my article fashion I mentioned that my openings are already fixed for approximately 20 years. No the reason is rather that I simply started to realize that losing isn't so bad at all and I enjoy more to continue playing. That endgames are my cup of tea, see e.g.  endgames bishop against knight, endgames knight against knight, endgames with an exchange extra,... also naturally helps to make the decision to continue playing. However immediate conclusions can't be drawn from above table as it gives no indication of the opposition. There are years in which I encountered very strong opposition by playing interclub in first division but also more weaker by participating in the local club-championship. The draw% and in lesser extend also playing on a position, naturally largely depends on the opposition. The second table nicely presents the differences again fully based on my own games.

This data permits us for each year to calculate what the average draw% linked to the rating-opposition must be and the average % of draws not fully played out with the sofia rules. The tool which I used, is of course to use for each game the excel-function VLOOKUP. 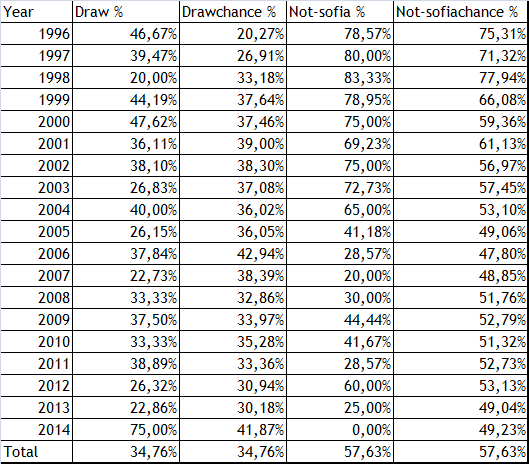 The total from the draw% and the not fully played out draw% with sofia rules are matching so we can trust the calculations. This finally permits us to make a comparison and some conclusions. As the year 2014 is still too early, I remove that one from the list. The comparison is made between the first 9 years: 1996-2004 and the last 9 years: 2005-2013.

I surely don't want with those calculations insinuate that this result will be for each player the same. However for me it is evident that applying sofia-rules will generate a substantial higher amount of decisive games. In other words sofia rules will create more tension which surely can't be bad. If not accepting early draws also improves the rating, is not clear from the TPR which I calculated each year. The last years I only played 30-35 serious games/ year which is of course not enough to make progression. Now I do have the strong feeling that by continue playing instead of quick drawing, in the end makes yourself a stronger better resistant player.

Sofia-rules have undeniable some clear advantages. An obligation for professional chess sounds to me not bad. However for amateurs I prefer to keep the choice to the players and try to convince them rather with arguments instead of rules. The fact that we today have a world-champion which almost always plays on till the final chance, will certainly help.