When studying openings I look attentively to what (strong) grandmasters play, which I already mentioned earlier in my article to analyze with a computer. However my choice of openings still remains something very personal. Besides this choice is already more or less for 20 years fixed (see the article the sequence). Even a line is only replaced when really no repairing is anymore possible (examples on my blog are  Dutch steps in the English opening , the fake truth ). This all fits in the philosophy of the scientific approach but most players play the game a lot more competitive. Swapping between openings is done regularly just to become not too predictable.

This means a continuous search for new playable openings. An amateur has mostly neither the time, nor the courage to do all the necessary research so we look to what grandmasters have in their repertoire. Naturally the stronger the grandmaster, the more players are attracted to this repertoire. If an absolute topgrandmaster starts to play an opening which is on top also easily playable for other players (amateur or prof) then we sometimes see a chain-reaction. A few players pick it up and their opponents are so impressed that they too insert the opening in their repertoire. If after some time it also turns out that black can show a plus-score on master-level than it completely goes wild.

The system is still popularized a lot as for example in the recent book Dangerous Waepons: The Ruy Lopez written by the English GMs John Emms, Anthony Kosten and the English IM John Cox there are at least 30 pages spent to it. 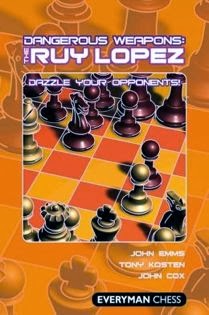 However it still is blurry what the future will bring for this opening. Is it just fashion or will it become more? In any case I don't expect the opening getting the same magnitude as the Berlin. If the opening will get a fixed place in a grandmaster-repertoire will depend a lot if refutations will be found or less strongly stated some annoying lines. In my analyse of the game against Roel, I show a possible path in which some advantage can be found. I admit it is still very complex but I do have reasons to be optimistic as afterwards I noticed that Tony Kosten also recommends the concept in his book.

No, I didn't buy (yet) the book but by coincidence when preparing this article I found a review on Chesscafe which indeed exactly discusses this idea. Probably I again invented the wheel which is unfortunately the destiny of a player not buying books (if we disregard some exceptional books) and mainly bases himself on his own analysis.

Addendum February 14
Vass managed to ditch up a "model"game in his databases, see chesspub which represents the idea recommended in the article.
Posted by Brabo at 10:48