In most chesstournaments there is bookstand in which you can during or after the tournament look around. This was also the case in the past Open Gent in which I took the opportunity besides searching a holidaybook also an openingsbook. Loyal followers of this blog will surely remember that I mentioned in the comments of my blogarticle schaakopeningen studeren that I don't use openingbooks to study openings. This didn't change today because I don't talk about the classical openingbook in which you can read but about an openingbook supplied for an engine.

What can we do with an openingbook for an engine? In a recent blogarticle gambits I expressed not to be interested in games against engines. This means that I don't play against engines anymore neither that I organize games in which engines are playing against each other. No for me the power of an openingbook lays mainly in de partijvoorbereiding.

The aspect time plays (for me) a crucial role in the gamepreparation which I recently showed with data in my blogarticle de sterktelijst. The reason of the timepressure concerning gamepreparation in the Belgium interclub must mainly be linked to the rather high number of possible opponents. In Swiss tournaments it is more the fact that the interval between the time of making the pairings public and the time of starting the game is limited (from several minutes to a few hours). In both type of tournaments it is necessary to work as efficient as possible and an openingbook can be a very handy aid.

This needs further explanation as I assume the above intro is insufficient to understand why exactly such openingbook can be useful. In contradiction with (some) professional chessplayers or even strong amateurplayers my knowledge of quite some openings is poor which I already mentioned in my blogarticle een uitgebreid zwartrepertoire. Combining this with the fact that I try to insert een wetenschappelijk aspect in each of my games, preparation is often for a big part a race against the time to acquire a basic knowledge of unknown systems/ variations which my opponent maybe will play (based of course on the available material in the databases). Basic knowledge, I consider knowing what are the critical games played in a system/variation with special attention to the most recent ones.

The research of the critical/ recent games can be done via a simple search-function of the particular position eventually added with minimum ratings of the players (e.g. + 2500) in e.g. Chessbase. However this method is rather slow and lengthy.


A much faster and more efficient method of (approximately) doing the same job, is to use an openingbook which an engine supports.
Below screenshot presents the result of such search using an openingbook linked to Fritz 11. 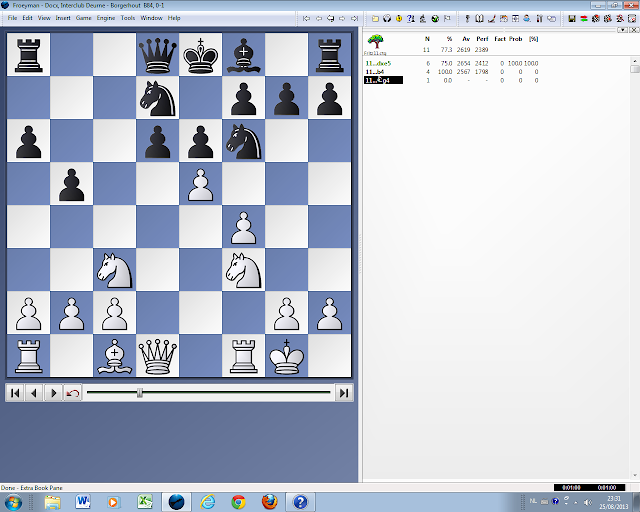 So we see right from the position the result of the search in the openingbook.
This working-method allows me to review and memorize in very short time a lot of critical variations. I even dare to state that if you have a good memory then 1 hour of preparation with this method is sufficient against most players (level against which I play so no +2700 players) to fill the gaps in the opening-repertoire.

In the last decade I've used many times this method in my game-preparations and till recently I was very pleased about the results. I say till recently as I had not so long ago a nasty experience with this method. If we look to the results of above screenshot then we can deduct that dxe5 and b4 should be investigated further. Ng4 can be ignored as only once played between lower rated players so very likely not relevant. This was also how I did my game-preparation in reality. The loyal blog-reader maybe already detected that this position is extracted out of my game against Stefan Docx which I discussed in my blogarticle grootmeesternorm voor stefan docx. If we replay that game then we quickly find out that Stefan chose for the move which I ignored: Ng4. Worse is to find out that the move Ng4 is today quite popular so it is weird that the openingbook doesn't mention anything about this.

It is however less weird when I tell that the openingbook is linked to Fritz 11 so dated from 2007. My own fault, I hear some people already thinking as using an openingbook from 2007 in 2013 is asking for troubles. Well in the previous years I've played few games and seldom against stronger players which made that I met few or no critical recent lines on the board. In other words I didn't perceive earlier the feeling that my openingbook was too old to be trusted. Also in my recent purchases of engines (Rybka, Houdini) no more openingbooks were added automatically. In contrast with the past, openingbooks are sold separately and I (and assume many other people) keep a strict control on my expenses so I omitted to buy an openingbook.

The nasty experience in my game with Stefan Docx learned me a valuable lesson so I asked Ben Van de Putte if he has for sale an up to date openingbook for engines in his bookstand on the Open Gent. Unfortunately the only one which he could present was opening encyclopedia 2013. I am wiling to pay approximately 30 euro (per year) but 100 euro as Chessbase requests, sounds to me robbery. It is Chessbase full right to profit from their monopoly in the market but I am not going to help them so I search for other legal alternatives.

A possible alternative is to search for free openingbooks which one can download from the internet. Anybody can with the aid of Chessbase create an openingbook so a lot is available on the internet. Search on the extension ctg and you will find a lot of sites even with recently made openingbooks. A problem with this alternative is that there is not guarantee about the quality of the offered openingbook. Which games were inserted? Did the author make adaptions to the book or is this all automatically generated by the computer? How up to date is the book?... Too many open questions for me to trust blindly such books.

Another alternative is to use a rather new trend of online openingbooks. We have 365chess.com, chesslive.de, gameknot.com ,... The most recently launched online openingbook is chesstheory.org, managed by USCF Senior Master Mark Morss with a very ambitious aim to not only restrict the data to played moves but also to add high quality analysis and precise evaluations. However also with this method there are some important disadvantages. First you need an internetconnection. If you are playing in a tournament then you are more or less forced to use a smartphone or something similar which I don't have. The available data in online openingbooks is often still of a lower quality compared with the openingbooks which are downloadable. I expect most online openingbooks are still starting up. A lot of the online openingbooks also require a membership which is often not for free. Finally maybe the biggest disadvantage is that you can not switch rapidly between engine and openingbook. If you arrive at the end of a variation then it is recommended to check the final position with an engine which is very tedious if you use an online openingbook.

In the end I chose to build my own openingbook by using Chessbase. I selected all the games played by + 2300 players in Megadatabase (2011) and the twics of the last 2 years so 2012 and 2013. I inserted the selected games in the openingbook and after some hours waiting, the new openingbook was fully generated automatically and for free ! Below you can find a screenshot using a search via the new openinbook based on the same position of the previous screenshot. 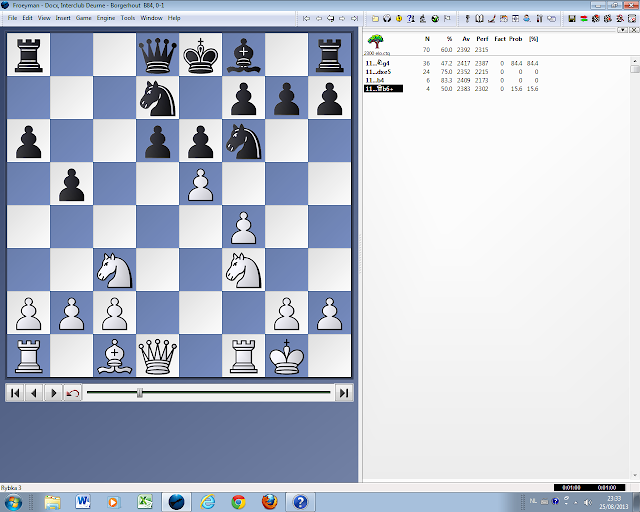 We notice immediately a totally different view of the same position. Ng4 which was ignored in my old openingbook, is now recommended as absolute first choice. The story is hereby not finished. I have now a new up to date openingbook which I can further update easily in the future but I still miss my green moves.

A statistical good score is no guarantee for a correct move. It is well possible that the refutation has been found only recently so that the number of games with the refutation is still very small and thereby has little influence to the total score. Neither is a statistical bad score a guarantee that a move is bad. It is well possible that a player chose for the best move but later threw away the advantage in the game. This effect mainly pops up when few games are played with a particular move. By using green moves, the evaluation can be refined. Appointing green moves is not an automatic process today and for a user doing this manually is an unfeasible job. There exists a middle to fine-tune an openingbook by letting the engine play against itself so the results are counted in the statistics. However we can't expect miracles from this method as we need thousands of games before you see some serious effect in the openingbook which takes an extraordinary amount of time with a simple pc.

I am satisfied with the first results of the new openingbook although at the same time i realize it is not perfect. I certainly welcome reactions from readers whom have different and hopefully better ideas to make an even more efficient and stronger openingbook without serious investments are needed.

Addendum 2 September
Thanks to a hint on chesspub I discovered on the Hiarcs website an openingbook which every 3 months is updated. They claim 80 points yearly is won in strength and no better or more complete openingbooks exist but without hard proof this sounds to me as a commercial talk. Free it isn't as 1 year subscription on the openingbook costs 50 euro without taxes. Too expensive for me without any guarantees on the quality but reactions of the readers are again welcome.
Posted by Brabo at 15:06